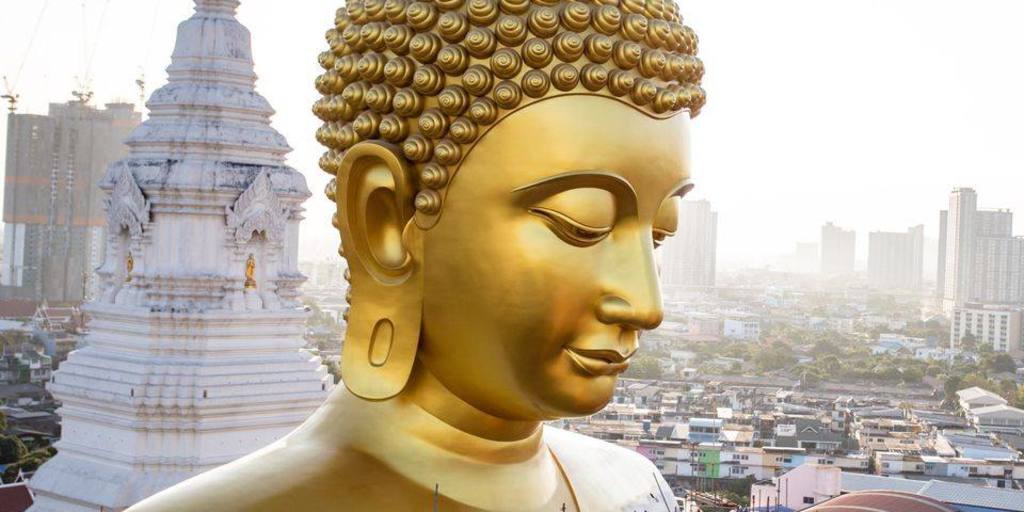 BANGKOK — Deep in a network of canals in the oldest part of Thailand’s capital city stands a newly completed giant clad in glowing bronze. Towering nearly 70 meters above the ground, the height of a 20-story building, it is the city’s biggest Buddha image, with a width of 40 meters in its cross-legged meditation posture.

The image, built since 2017 at a cost of 100 million baht ($3.3 million), looms over the Klong Dan waterway at Wat Paknam Phasi Charoen, a temple founded in 1610. Named Dhammakaya Dhepmongkol, it is the most ambitious recent project of its kind in the country, reflecting Thailand’s continuing reverence for Buddha images.

Although Wat Paknam is not on the conventional tourist trail, it is a revered landmark for many Buddhists because it is where the Dhammakaya Buddhist movement — whose teachings conflict with Thailand’s majority Theravada tradition — was founded in the early 20th century.

The Dhammakaya movement’s popularity has transformed the temple, which was in a state of disrepair at the end of the 19th century but is now a wealthy center for Buddhist studies, with hundreds of resident monks, lay workers and mae chi — the white-clad lay women who are often referred to as nuns, although women cannot be ordained in Thai Buddhism.

An 80 meters high, 12-sided stupa was completed on the site in 2012, with five floors, a museum, a hall and a glass chedi (a monument or shrine) of an intense emerald-green hue, greatly increasing the number of visitors and revenue flow. The 82-meter-long Mya Tha Lyaung Buddha was built on an ancient temple site in Bago, Myanmar, some 20 years ago and is an important destination for Burmese devotees. (Photo by Ken Barrett)

The giant Buddha image, which stands just outside the stupa, easily outstrips Bangkok’s previous champion, a 32-meter standing Buddha figure at Wat Inthara Wihan, on the other side of the city. That image, begun in 1867 and made of brick and stucco gilded with 24-carat gold, took 60 years to build. The abbot who initiated its construction died at the foot of the image in 1871, adding to the reverence for the enormous figure felt by devotees, who flock to worship year-round.

For the faithful — and, before the pandemic, for both domestic and international tourists — these giant Buddha images are irresistible attractions. The figures are installed out of piety, but bring funds to the temples from donations, sales of amulets, artifacts and souvenirs, together with income for neighboring shops and vendors, many of which stand on temple land.

Sometimes a giant image transforms an entire neighborhood. One of Thailand’s biggest is located in the Gulf of Thailand on an islet named Koh Faan, just off the larger island of Koh Samui, to which it is connected by a 3 km causeway. The seated image is at Wat Phra Yai, which translates as Big Buddha Temple, and is 12 meters high. Built in 1972, the image predates Koh Samui’s status as a prime tourism destination, but has become so well-known that the locality, previously a fishing hamlet named Bang Rak, is now known as Big Buddha Beach.

Nearby, the Buddhist temple of Wat Plai Laem, which has a Chinese tradition, has built a representation of an 18-armed Guanyin, the Buddhist bodhisattva (a person who has achieved great moral and spiritual wisdom) that the Chinese associate with compassion. A thriving township of hotels, shops, restaurants and entertainment outlets has grown up around the temples, and the area is a focal point during festivals. Top: An entire township and tourist destination has grown up around the Big Buddha Temple on the Thai island of Koh Samui. Bottom: The Buddhist bodhisattva Guanyin is another attraction at Samui’s Big Buddha Beach. (Courtesy of Impact Samui)

Not to be outdone, Phuket Island, in the Andaman Sea, began erecting its own giant Buddha image in 2002. Only recently completed, the 45-meter-high image is faced in white Myanmar marble and measures 25 meters across the lap. Known as the Ming Mongkol Buddha (Gloriously Honorable Buddha), it sits atop Nakkerd Hill at Chalong Bay, on the eastern side of the island where the tourist boats arrive, and is part of the Wat Kata Temple.

However, the Buddha images in Phuket and Koh Samui pale in comparison with the seated image at Wat Muang, in Ang Thong Province, about 140 km north of Bangkok. At 92 meters high, and with a knee span of 63 meters, it is the biggest image in Thailand. Completed in 2008, it took 18 years to build, is made of gold-painted concrete, and is visible for miles across the flat terrain.

Although important historically, Ang Thong is not on the international tourist trail, but the Phra Buddha Maha Nawamin image has made it a popular destination for Thais, bringing devotees, tourists and funds to the temple and the province. 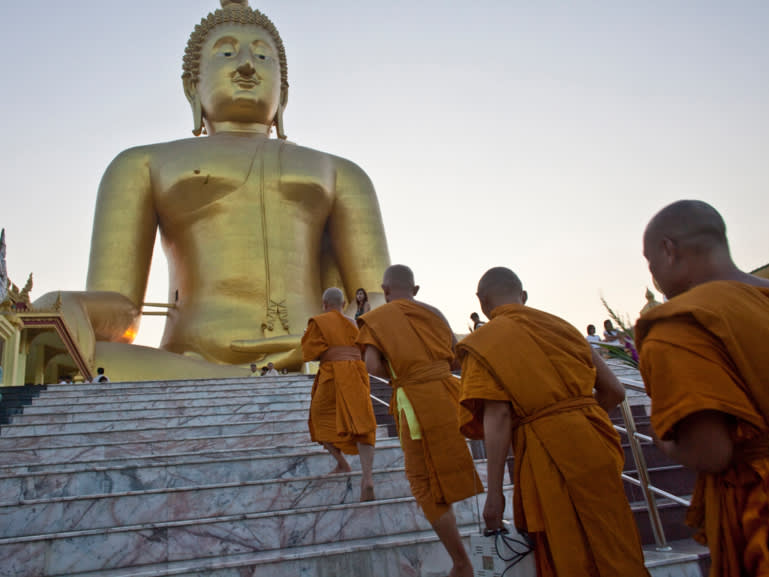 The seated image at Wat Muang, in Thailand’s Ang Thong Province, is the country’s biggest Buddha statue and is visible for miles across the flat terrain.   © AP

China has taken the use of giant Buddha images as tourist destinations to its limits, with the world’s largest image, the Spring Temple Buddha, at Lushan County in Henan Province. The image is a staggering 128 meters high — or 208 meters including the lotus throne, the pedestal, and the hill upon which it stands.

Completed in 2008, the Spring Temple Buddha is one of a large number of giant Buddha figures dotted around China, a trend that began in the 1990s — although the 71-meter Leshan Buddha was carved into a cliff in Sichuan Province in the eighth century. The Grand Buddha at Ling Shan, in Jiangsu Province, was completed in 1996, and its 88-meter-high bronze figure (including a 9-meter lotus pedestal) was briefly the world’s largest. Completed in 1996, the 88-meter-high Grand Buddha at Ling Shan, in China’s Jiangsu Province, was briefly the world’s largest.   © AP

Other huge Buddha or bodhisattva images can be found at Sanya in Hainan Province (108 meters), Changsha in Hunan Province (99 meters), Foshan in Guangdong Province (62 meters), and Yantai in Shandong Province (38 meters). The world’s highest golden Buddha statue, at 48 meters tall, stands on Mount Emei in Sichuan Province, one of the Four Sacred Buddhist Mountains of China.

These are all standing or seated images. Enormous reclining Buddhas, representing the entry of the Buddha into Nirvana, also exercise an irresistible attraction. Bangkok’s reclining image at Wat Pho, built in the 1840s with a length of 46 meters, is one of the world’s longest.

Myanmar is better known for its reclining images than its standing figures, with the 66-meter-long Chaukhtatgyi Buddha in Yangon established as one of the most revered images in the country. Myanmar also has the world’s longest reclining Buddha, a 180-meter-long image at Win Sein Monastery, near Mawlamyine. Set on the side of a hill and surrounded by stupas, statues and monastic buildings, the figure is hollow and visitors can explore internal rooms containing exhibits and photographs. Yangon’s 66-meter-long Chaukhtatgyi Buddha is one of the most revered images in Myanmar. (Photo by Ken Barrett)

An enormous and very ancient reclining image, the Shwethalyaung Buddha, can be found at Bago, in Myanmar. Thought to date from 994, the 55-meter-long figure was lost in the middle of the 18th century when the Bamar king Alaungpaya attacked and razed Bago.

British colonialists, building a railway line in 1880, discovered the image buried in the jungle. Restored, it now lays protected within a hangar-like building. The Shwethalyaung image and the nearby Mya Tha Lyaung Buddha, an 82-meter reclining image built on an ancient temple site some 20 years ago, form an important destination for Burmese devotees. 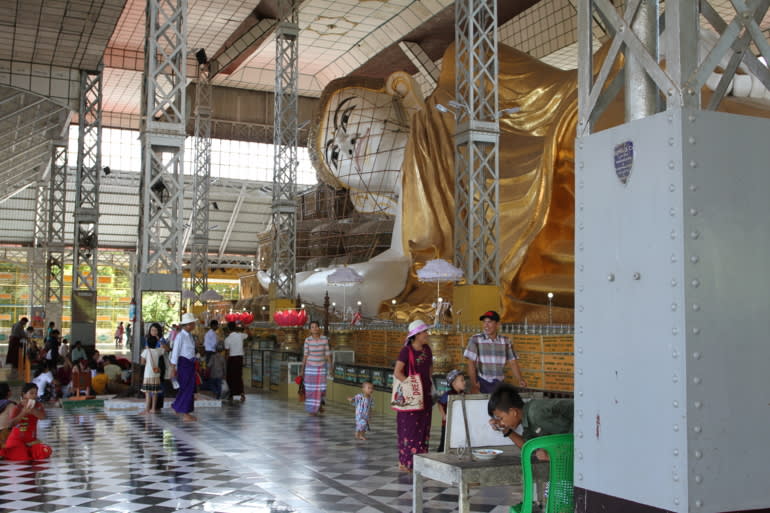 Lost and found: The Shwethalyaung Buddha at Bago disappeared for more than a century. (Photo by Ken Barrett)

A curious feature of Bangkok’s two giant Buddha figures is that both are almost invisible from the street. Only the topknot of the Wat Inthara figure can be glimpsed above the encroaching buildings as one travels along the flyover on Rama VIII Road, while the tangle of little streets and buildings around Wat Paknam mean that its image can be fully seen only from the adjacent canal.

Traveling by water is the most evocative way to visit Wat Paknam, while also avoiding the traffic-snarled roads, and proposals by the Bangkok Metropolitan Administration to upgrade the canal infrastructure and improve access for passenger boats will make this extraordinary image a popular Bangkok attraction.