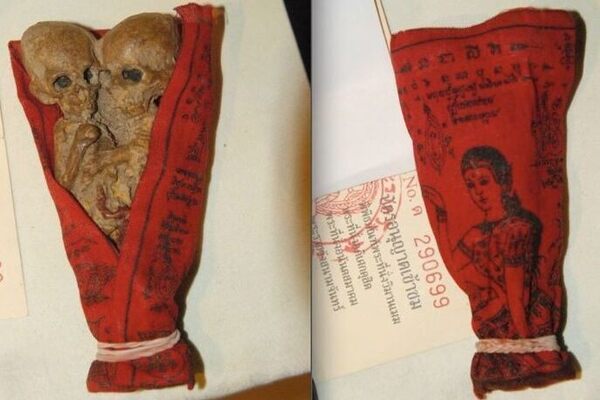 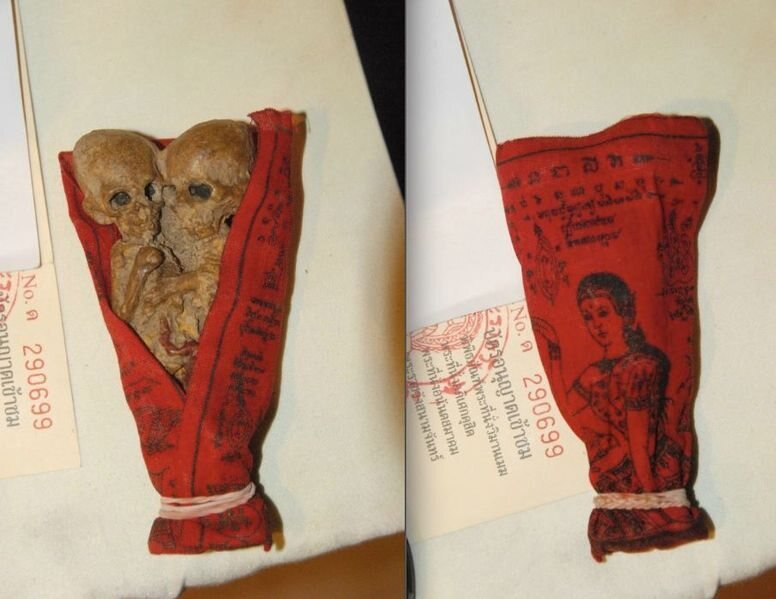 A reproduction Kuman Thong sold as a souvenir at the Buddhist temple at Ayutthaya, Thailand (photograph by Greg Field)

We often grumble about security procedures at airports, whether it’s the long lines or the random searches of our luggage. Occasionally though, I feel bad for airport security folks, simply because of the ridiculous contraband they unearth on a regular basis: armored anteaters disguised as fruit, drugs stashed inside breast implants, and the list goes on.

However, nothing compares to what some Thai police officers found stashed in a man’s travel bag in May 2012 (warning: graphic pictures): six human fetuses that had been roasted and then carefully covered in gold leaf.

28-year-old Chow Hok Kuen soon admitted to buying the small bodies for a touch more than $6,000, intending to resell them in Taiwan as good luck charms for at least six times the purchase price. There was only a brief media buzz about this grisly find, but these kuman thong (กุมารทอง, Thai for “golden boy”) have a strange and persistent history in Thailand. 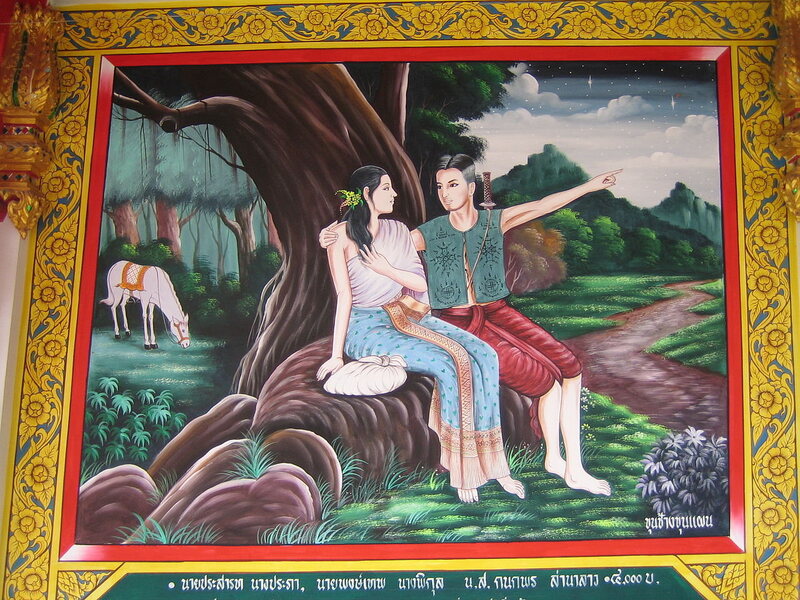 Mural of Khun Phaen and his wife (photograph by Chris Baker)

The Thai occult tradition of kuman thong originated in 19th century poet Sunthon Phu’s novel Khun Chang, Khun Phaen. In the story, Khun Phaen, a high-ranking soldier close to the king, earns the favor of a powerful sorcerer. The sorcerer takes such a liking to Khun Phaen that he offers his daughter in marriage. Unfortunately, some time after Khun Phaen learns of his wife’s pregnancy, Khun Phaen and his father-in-law begin arguing so much that the sorcerer plots to have Khun Phaen killed. Khun Phaen discovers that his wife has been commanded by her father to poison him, and in a vengeful rage, Khun Phaen cuts his own child out of his wife. With the bloody fetus in hand, Khun Phaen builds a fire at a temple, placing the body on a grill after wrapping it in pieces of sacred cloth covered in prayers. While Khun Phaen chants prayers, the roasting soon reduces the fetus to a dried-out husk, with only paper-thin skin stretched over a skeleton. At the end of the ritual, the violently aborted child had become a ghost with whom Khun Phaen can speak and communicate, a sort of guardian spirit for his father.

Despite the fictional origins, belief in kuman thong took root in southern Thailand, with widespread belief that these protective ghost children could warn against any dangers that threatened a household. Ancient manuscripts detailed additional steps on how to make kuman thong, such as requiring the ritual to be completed before dawn in a cemetery and painting the dry-roasted baby with lacquer before applying gold leaf. 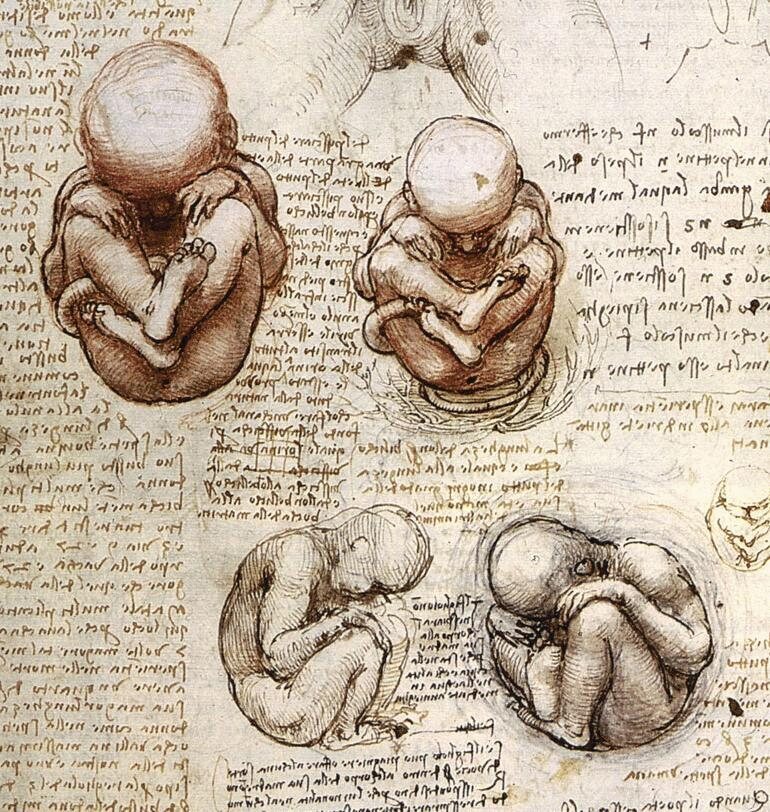 While there are Thai laws against using human-derived products for consecrating kuman thong, occasional stories of more “authentic” charms (like the 2012 discovery) still arise, giving glimpses into the extent of the underground markets for these disturbing artifacts. In another high-profile case in 1995, a Buddhist novice named Samanen Han Raksachit was arrested after a video surfaced of him piercing, bleeding, roasting, chanting, and collecting the meaty drippings of a baby at Wat Nong Rakam in Saraburi province. He had been selling the fatty liquid as ya sane (“lust medicine”) to monastery visitors. Raksachit was forced out of the monastery and arrested, but he did not serve any jail time.

Other reported cases of kuman thong involve people buying fetal corpses from illegal abortion clinics. In June 2010, 14 dead babies were uncovered in an abandoned rural home in Ubon Ratchathani province, and a former nurse was charged with illicitly selling the corpses for $30. Later that year in November, 348 aborted fetuses were found wrapped in putrid plastic bags at a Buddhist monastery at Wat Phai Ngoen, in the heart of Bangkok. They had been bought from five different illegal abortion clinics with the goal of sale to magicians and amulet dealers. Once the news broke, hundreds of people swarmed the monastery to chant for the deceased fetuses, and some even asked whether the corpses would be made available for ritual use. 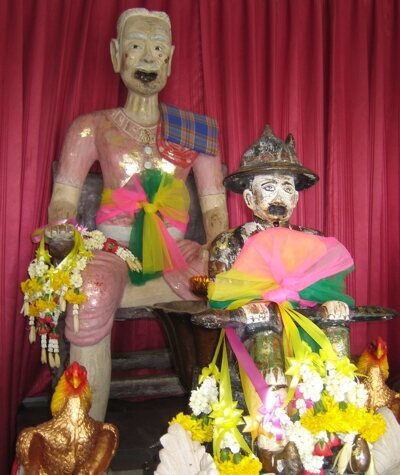 Even today, one can find for sale at various temples small wooden statutes of a boy with his hair in a topknot, sitting with his hands in prayer. As the most innocuous form of kuman thong, some of the most valued effigies are carved from the wood of demolished Buddhist temples because it is believed that the building itself soaked up the sacredness from the monks who used to sit inside and chant prayers. Unfortunately, black magic still may be involved because it is believed that the most powerful charms are bathed in the extracted fat of a dead child or adult who died under violent circumstances.

Caring for these statues has its own set of guidelines, requiring the owner to place it on a shelf and to offer it cups of milk and sweet drinks. Kuman thong are allegedly able to see and hear for a distance of 20,000 kilometers, giving ample protection to any household. Occasionally, however, the kuman thong are believed to be tricksters, with a particular fondness for teasing small children. When this happens, the owner is supposed to chastise the spirit by striking it lightly with a wooden rod while speaking to it in a stern tone. When someone is no longer able to care for a kuman thong in the proper fashion, he or she can dispose of it at a temple.