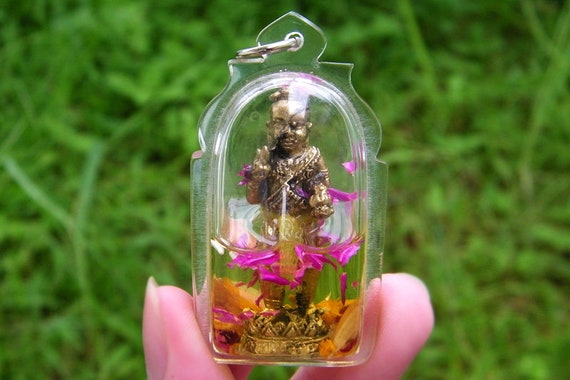 Story Of Leklai
The words LekLai may be translated “steel eel”, an allusion to the ability of certain Lek Lai to assume the liquid state. In many tales, one is assured that Lek Lai is not a simple mineral but a kind of metal-animal , capable of “swimming across mountains”. One of the foremost powers of Lek Lai is to render its wearer invulnerable, and to prevent any fire arms from going off anywhere near him.
It can just as easily be used as a weapon of attack, at once reverting to the liquid state, flowing toward the victim, invading his body by the nostrils and ears, poisoning his blood and immediately returning to its guardian in its usual state. The consequences of putting Lek Lai into action varying so greatly from one person to another, I insist that clients coming to this site use their intuition and discernment in their resolve to purchaseLek Lai and especially not to employ it as a substitute medical treatment or putting it to work
as a bullet proof vest. Lek Lai is a gift of Nature; one cannot change it, one cannot improve it in some artificial way. Healers report that it lends its power to theirs, thus increasing their efficacy, as well as lending greater strengths to their medicines. One should keep in mind that each kind of Lek Lai has its own special powers and one should NEVER disrespect and put these powers to the test, either bringing about its disappearance or creating a serious “accident” (for example, no way will Lek Lai do its work if its wearer is dumb enough to be shot voluntary). It is urgent to appreciate that a very, very special substance is being discussed here, that it is known to be lived in by a “spirit”, capable of making its own choices and to do damage if not shown respect.
The following information has been translated by a text of the very venerable Acharn Boon, itself, a translation of a fragmentary ancient text. The passages do not always follow a logical sequence and I have done my best to make the text understandable all the while staying faithful to the original – nonetheless I must excuse myself in advance for any error arising due to my ignorance. These writings are not available anywhere else in French and I thank you
in advance for not copying and/or pasting them except for private use. It is evident that the prayer texts recorded in these writings are for informational purposes on and IN NO CASE are they to be taken up and used by a person not qualified to undertake the harvesting of Lek Lai himself!
Acharn Boon Distinguishes the Two Major Lek Lai Families:
(1) Using for ingredients the minerals “Pla? Dhum”, “Khamin Kaew” and “Mae Perng” (note: these are ancient Thai names for unidentified minerals ), some forest monks can put at work their transcendent powers during special ceremony to purify and commingling these mineral bases, making them become extremely hard, then changing them into a kind of Lek Lai green in color, which will be indestructible, even by the master who brought them forth! (Note: this strongly brings to mind and ancient version describing the technique of making Mekkapat)
(2) The ancient Lek Lai, “Kod Lek Lai”, which one finds sometimes hanging from cliffs and which those who go deep into the jungle may find and bring back. If the person who finds has much merit and pure heart, he will be able to cut the lek lai from the cliff with an ordinary knife (note: Acharn Boon seems to be speaking here of a plant or at least some sort of organic substance, not mineral). This sort of Lek Lai can change color from black to dark green if one humbly so requests of it, and it will be able to carry and will always protect the one who is carrying it. WARNING: in no case ought the powers of Lek Lai to be put to the test!

Story Of NAGA EYE – Natural Crystal Healing Stones
Tah Phraya Nahk or Naga Eye Gems are created by monks in a secret process which smelts natural crystals from sacred caves, adding precious metals and gem pigments to form a beautiful gem with an eye-like center. The gems are believed to be powerful talismans in helping the bearer to stay safe and healthy. NAGA EYE is a nature stone and is one of the gem stones that used in temple for made an amulet. Naga eye is found in many river floor bottom, but the most prized Naga eye is in deep caves of the ‘Mekong River’ which pass Thailand, Burma, and Laos. It is very rare, high quality, value Buddha and very excellent item for your collection. In Thailand some people to have faith in this Naga stone can bring lucky for owner. It is the best items for amulet collector. Because you will having good health and have a mystical powers, the gem stone is believed to banish fear or evil, depression, reduce fever and is believed to be excellent for eyes or vision. The discovery place were Gemstone of NAGA EYE BUDDHA AMULET often found in the caves in the deep forest such as cave in the northeast sector of Khon Kaen province or cave in Phu Phan mountains at Sakon Nakhon Province believed was a place of mystery as the serpent and city bowels of the holy cave. The features of diamond serpent that resembles a pebble with in the vitreous, a flat surface, round spell shape have high strength difficult to cut. There are several small multicolored, each color will have features for possession of difference believed that “Diamond Serpent” is the holy relics which are the thousands or thousands of years and had protected by serpent or hermit and also had calling name many names; Diamond Serpent, Diamond Nagar, Srinagar Glass Gem, Nagar Gem, etc.
According to legends Ganesha is a great scribe and learned in religious lore and scriptures. Hence, Ganesha is often depicted with only one tusk, since it is believed that he broke off the other so that he could inscribe the Mahabharata, which was dictated by to him the seer Vyasa.