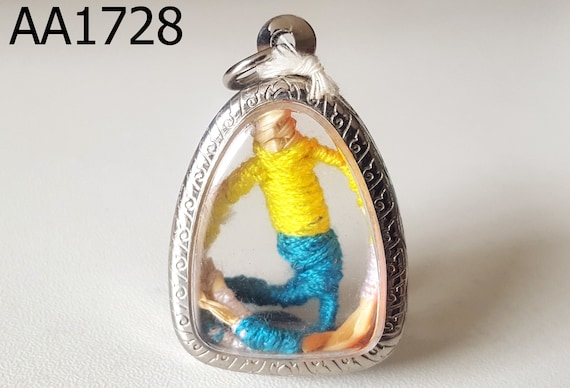 Story Of Thai Amulets
Thai amulets gained tremendous popularity in the 1800’s during the reign of King Rama V, but go back centuries. Tribal people probably wore or kept magical talismans, prior to the introduction of Buddhism as there are archaic images found in Thailand that are not Buddhist.
When the Thai Kingdom evolved and Buddhism was introduced, the former practices were not erased, as is often the goal of major religions that seek to dominate past practices. Buddhism is tolerant, and most amulets with pre-Buddhist symbols have been made by monks. A talisman or amulet is believed to counteract bad events, illness, black magic, evil spirits or misfortune such as accidents or assault.
Tiny molded Buddha images were often buried in spires with the ashes of famous monks and Royal persons and the older ones have been excavated and used as powerful amulets. Still other votive tablets have been manufactured in temples and given to favored parishioners (usually those who make donations) and are blessed or consecrated–and in this way money is raised for new temple buildings. These days almost every Thai wears or keeps multiple amulets, sometimes having a large collection kept at home aside from those worn on necklaces and waist cords under the shirt and amulet collecting is a huge national Thai pastime.

STORY OF HOON PAYON
Hoon PaYon Power Amulet for Protection
Regarding to Thai history, Khun Paen was a very famous soldier for the King in Ayuttaya period. When his father died, his mother want Khun Paen to be a super soldier as same as his father. She then took him to be a novice since he was 15 years old. Khun Paen learned knowledge of super-magic, and then left the temple to rise up as a powerful and important soldier for the King like his father. Khun Paen could use his magic power to be invulnerable and unseen by his enemies. Thai people believe Khun Paen could also use his magic to call the ghost to help him win a fight. Also, he has a magic to made Hoon PaYon for protecting his house and assets.
Hoon PaYon can be made from many materials such as soil, metal, bamboo etc. In the past history, Hoon PaYon was created to take care of the house, office, farm and car from thief, protecting the owner from black magic, evil spirits and any bad things. Also, to bring good fortune in business affairs to the owner.
Figure of Hoon Payon like a human doll, old man or robot.
Cotton thread color of Hoon Payon will defined purpose of usage. For example, red thread means take care or guard owner’s house/asset. Black thread means protect owner from black magic or bad things. White threads means protect and brings good fortune in business to owner.