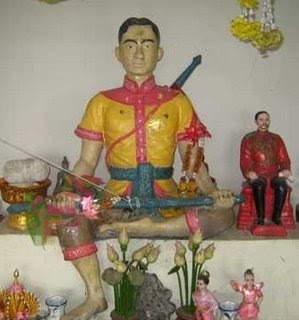 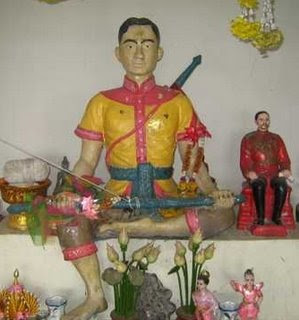 Khun Phaen was known to be the person who create the Baby Ghost – Kumantong. This story has inspired the people into the practice of robbing tombs for the corpses of babies and young children by the people of 0lden days Siam and making them into powerful Baby /Child Ghosts.

Phlai Kaeo (later Khun Phaen), Khun Chang, and Nang Phim (later Nang Wanthong) were childhood friends in Suphanburi. Phlai Kaeo grows up to be handsome, clever, and brave, but he was poor because his father was executed by the king, and the family ruined. He ordained as a novice monk to be educated, and excels at martial arts and love magic. Khun Chang was his opposite ­– bald, ugly, and crass, but very rich.

By age 16, Nang Phim was the most beautiful girl in Suphan. She meet novice Phlai again at Wat Palelai during the Songkran (Thai new year) festival. They had a passionate courtship, but Khun Chang is also smitten by Phim and tries to win her through his wealth. Love triumphs. Phlai Kaeo left the novitiate and they got married, even though Phim can already saw that he was a great womanizer. After only two days together after the marriage, Phlai was called up to lead an army on a campaign in the north.

Phim fell sick from pining, and the abbot of Wat Palelai changed her name to Wanthong to revive her luck. Khun Chang took the opportunity of Phlai’s absence to spread the rumour that Phlai Kaeo had died in battle, and used his wealth to tempt Wanthong’s mother, whom then consented to the marriage. Wanthong resisted at first, but soon came to enjoy a comfortable life and an attentive, faithful husband.

Phlai Kaeo won victory in the north, and returns with fame as a warrior, and a new wife, Laothong. The king gave him the title Khun Phaen. When he reached Suphanburi, Wanthong and Laothong had a jealous quarrel. Khun Phaen departs for Kanchanaburi and Wanthong staid with Khun Chang.

But before long, the king agreed to the sneaky Khun Chang who was bad-mouthing about Khun Phean skipping royal service, therefore Khun Phaen was strip from his rank, given 100 lashes and all his property seized and to take Laothong away from Khun Phean, never letting them see each other again as punishment.

Khun Phaen left to stay in the forest alone. Driven with ambition to gain back his reputation and revenge for his love , he needed 3 things to be formidable. He then equipped himself with a magic sword, a magnificent horse, and a powerful spirit, Golden Boy – Kumantong.

Then he came to Suphanburi and kidnapped Wanthong from Khun Chang’s house at the dead of night. They fled to an idyllic sojourn in the forest. But Khun Phaen killed two royal officials sent after them, and so becomes a wanted man. When Wanthong became pregnant, he decides to give himself up.

At the trial, he cleared himself, but then angered the king by asking for the return of his second wife, Laothong. He was put to jail. Khun Chang took the opportunity to kidnap Wanthong while she was on the way to visit Khun Phaen in jail. He took her back to Suphanburi, where she gave birth to Phlai Ngam, a son with Khun Phaen.

When Phlai Ngam was 13, Khun Chang jealously tried to do away with him by beating him up and abandoning him in the forest, but he was saved by Khun Phaen’s spirits. Wanthong decided to send Phlai Ngam off to live with his grandmother in Kanchanaburi.

Khun Phaen festered in jail for many years. He was released when the king needed him to lead another military campaign in the north. Phlai Ngam, now an adolescent, joined him on the campaign, and started to follow in his father’s amorous footsteps by winning, Simala, the beautiful daughter of the governor of Phichit. Khun Phaen was again victorious in battle. The king was so pleased that he not only restores Khun Phaen to royal favor, but bestowed on Phlai Ngam the title of Phra Wai and two wives – his beloved Simala, and a daughter of the defeated King of Chiang Mai.

At the wedding, Phra Wai and Khun Chang got into a drunken quarrel which ended in a court case. Khun Chang lost the case and faced punishment, but Phra Wai appealed for him to be freed.

Khun Chang petitioned the king to regain Wanthong as his wife. At the hearing, the King insists that Wanthong could not have two husbands and must choose either one. But she could not because each had meaning for her in a different way. The king lost his temper and condemned her to death. Phra Wai appeals, and won a reprieve. But the order came too late. 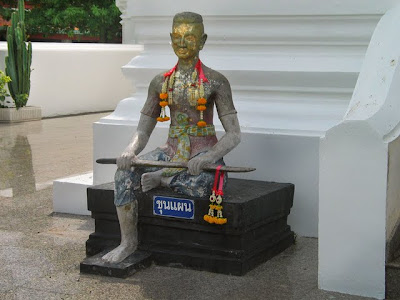