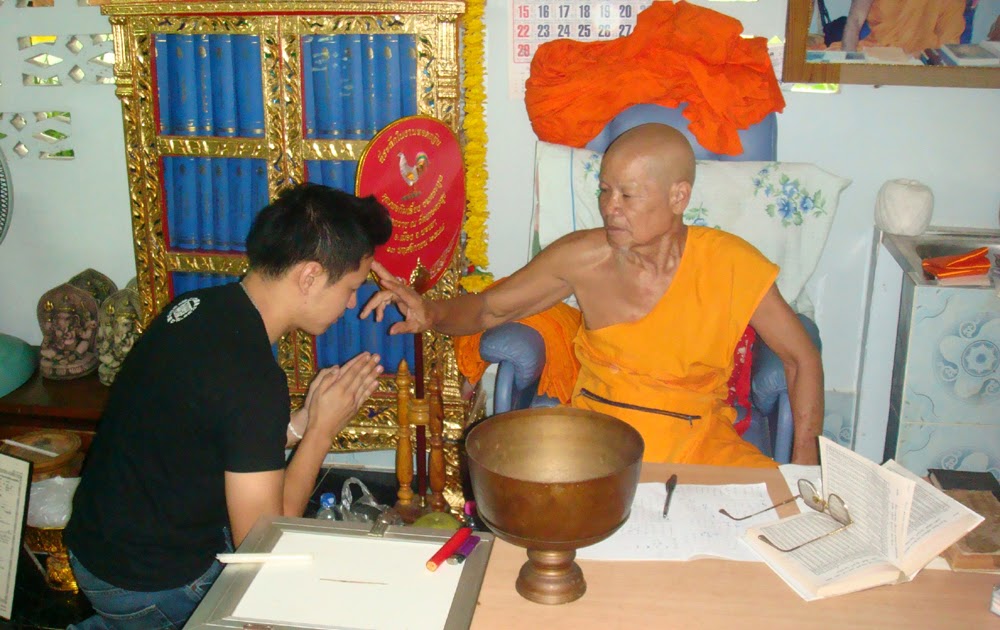 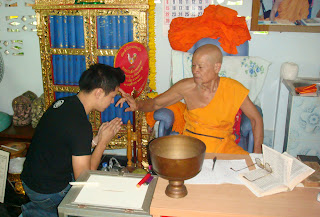 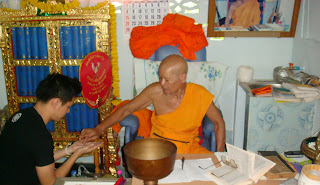 I arrived at Wat GaSatSook, the temple and resident of LP Sawat. According to the Thai local people, LP Sawat is famous for his Phra Lak Nah thong amulets. He is also a master of fortune telling and can forecast the future.
When it was my turn for the blessing, LP Sawat drew a ‘Phra Lak Nah Thong’ yantra on my forehead. While he was deeply chanting, I can felt a strong energy flowing from his fingers into my body. I can even felt my body shaking. Simply Amazing.
After that, he contiuned to draw and chant a special ‘Salika Lin Tong’ yantra on my lips and palms for best metta, attract good opportunity and good communication with people. When the blessing was finished, he told me that this ritual is good for increase metta and attractiveness.
He also advised me to wear his Phra Lak Nah Thong amulet for to be lucky in love, strong courage and metta mahasaney (Attractiveness).

LP Sawat was indeed a humble and good monk.

LP SaWat or Phor Poo Lersi of wat GaSatSook, Phayao province is well-known and popular for his knowledge in Visha (Supernatural arts.) Before he was ordained as monk, he was a Lersi (Hermit).
He studied magic from Master of hermit who was knowledge of Visha and Sammahdti (meditation) for more than ten years.

LP SaWat lived with his master in the deep cave of Thailand. After LP SaWat succeeded in learning Visha arts from his master. His mater advised LP SaWat to become a monk and help the people in the Northern part of Thailand.

LP SaWat ordained as a monk at the old temple in Sing Buri province.
He went alone to the deep jungle of Thailand, Laos, Burma and Cambodian, to gain knowledge and to build up his good karma and Visha.
Until the day he passed Phayao province, the local people who stay in Phayao requested LP SaWat to live and teach them about Buddhism way.
At the same time, people who had studied dharma practices under LP SaWat, had given the land to him for building the GaSatSook temple.

Every day, many people went to visit LP SaWat. They seeked him for his help, conduct magical ritual and fortune telling.
LP Sawat knew almost everything and could forecast the future.

Regarding to the Ramakien story,
Lakshmana is described as the incarnation ofAnanta Shesha, the thousand-headed Naga upon whom rests Lord Vishnu in the primordial ocean of milk(Kshirasagara) . The Lord of Serpents, Sheshanaga was incarnated to the earth in the form of Lakshmana and during the Dwapara Yuga, he incarnated as Balarama. He is said to be an eternal companion of Vishnu in all incarnations.

Lakshmana is part of the Mariyada Purshottamm, or The Perfect Man personified by Rama , by his unswerving loyalty, love and commitment to his elder brother through times of joy and adversity alike. He is an invincible warrior committed to virtue and the service of his brother. He never covets the throne of Ayodhya , nor hesitates from joining his brother in exile, even though he does not have to.

Lakshmana is considered a powerful warrior nearly equal to Rama. In the war against Ravana and his Lankan army of rakshasas, Lakshmana slays thousands of powerful demons such as Atikaya and Prahasta, Ravana’s chief commanders, and his son Indrajit. With Rama, he also slays Kumbhakarna, the great giant rakshasa.

Once upon a time there was a giant king (called Tosakan) on the island of Lanka who won a battle against the god Indra and then sought to achieve the rule of the whole world. The gods knew that only a mortal man would be able to stop the invulnerable giant and sent the god Vishnu down to earth. Vishnu is reincarnated as Prince Rama (Phra Ram), son of the mighty King Tosarot of Ayuthaya. Rama and his faithful brother and friend Lakshmana (Phra Lak) become famous heroes and Rama is appointed by his father as successor to the throne of Ayuthaya.

When Rama manages to win beautiful and chaste Princess Sita as his wife, their happiness seems complete.

However, an envious concubine of King Tosarot convinces him to favor her son and to disinherit Prince Rama. Rama, Sita, and the faithful Lakshmana are expelled from the royal palace and have to flee into the jungle where they spend the next fourteen years hidden in a hermitage. 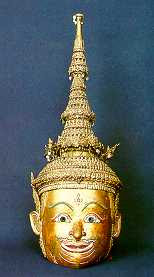 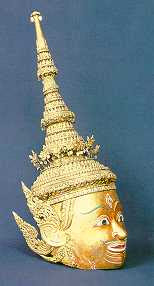 Lakshmana is revered for his absolute devotion to Rama.
His performance of his duties as a younger brother is considered to be a sacrifice and superiority of character as such duties are especially hard to do in adverse conditions. Lakshmana’s life symbolizes the duties of a man to his elders and superiors, and how greatly valued is seflessness in a man’s character.

While he is generally considered to be rather short-tempered when compared to Rama, Lakshmana is also considered an important element of Mariyada Purushottama, displaying great courage and presence of mind when Rama becomes distraught, angry and desperate over the loss of Sita — in an uncharacteristic display of desperation, a furious and almost hopeless Rama, not knowing of Sita’s fate or whereabouts, is suddenly about to fire a weapon capable of bringing vast devastation of life; Lakshmana stops Rama, calms him down, explains to him that the world is not responsible for their separation from Sita, and consoles and encourages his righteous brother, while giving him support and strength to keep looking for her.

‘Phra Lak Nah Thong’ (Lakshmana) was known as a hero that possessed a handsome and charming feature. Everyone who saw or have an eye contact with him will fall in love. 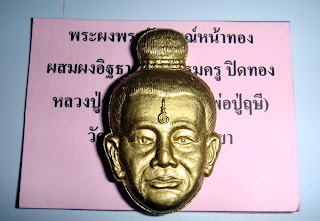 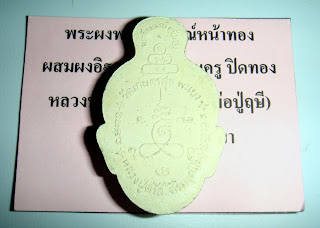 1) Powder of Metta Visha. He dedicated his chanting day and night.

4)Mixed all the materials together, until all become one same unique materials

5) LP SaWat molded Phra Lak status from materials blessed and hang out to the sun for 3 days to absorb the universe energy.

6)After 3 day, LP SaWat wrote Yantra Script with ancient KaTha on the face of Phra Lak amulet and invited Phra Lak Nah Thong down from heaven to bless the amulets.

According to Lp Sawat, he only made 399 statues of this ‘Phra Lak Nah Thong’ amulet.
Many Thai people believed that Phra Lak amulets helped them to be lucky in love and gave them strength to be brave as a hero in their women’s mind. Also this amulet is for those who wanted a promotion and unending support from higher upper management in their career.

Due to limited pieces produced, I only manage to take a few pieces of this Phra Lak Nah Thong amulet back from his temple.

I PROVIDE OVERSEAS TRANSACTIONS AND ACCEPT PAYPAL PAYMENT TOO,YOU CAN EMAIL ME FOR THE RATE AND EXTRA SHIPPING CHARGE FOR THE AMULETS.. I care a lot about how the amulet has helps you in your life.Nothing is more important to me than a happy client. ..
If you need help and got a question to ask, pls email me at: [email protected]