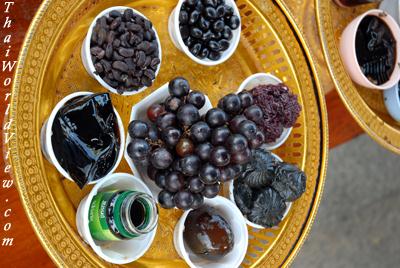 The items are already prepared by the temple and are sold at 288 baht per set. 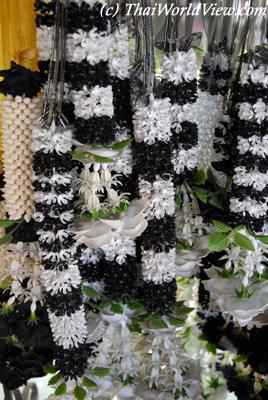 The symbol of Rahu is the number 8, a powerful figure believed to be the origin of all earthly things. 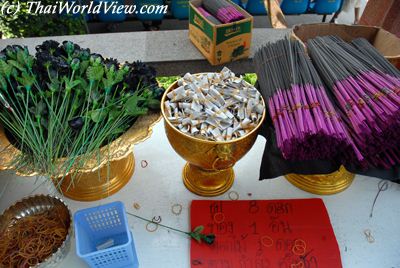 In year 1997, the Prime Minister Chavalit’s wife, Khunying Phankrua Yongchaiyudh, was to seek help from Rahu, the mythical god of darkness, to keep her husband’s coalition government in one piece. Seeking the blessing of Rahu to repel bad luck is a common practice. 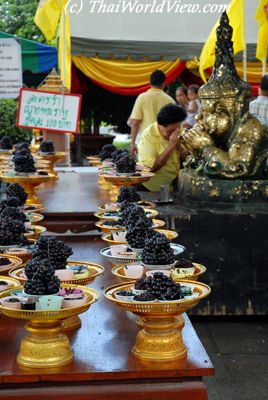 Many bees are flying around the sweet and black food. 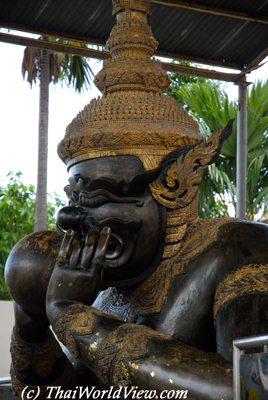 God Rahu Black is the color of Rahu, the God of Darkness.

Rahu is said to swallow from time to time his two brothers, the moon and the sun, and throw them out again. It is the popular explanation for eclipses. 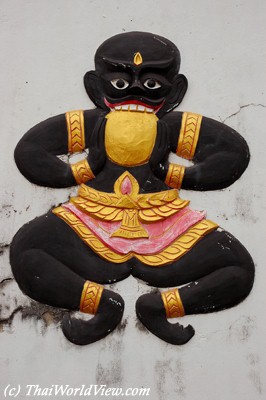 God Rahu In year 1997, Wat Srisa Thong in Nakhon Pathom took part in a ceremony seeking blessings from Rahu, god of darkness. The ceremony was important to Rahu followers because of the total lunar eclipse. Followers believe the eclipse was caused by Rahu’s shadow over the full moon.

In year 1997, many Thai people believed that the economic crisis has been caused by Rahu, the God of Darkness. 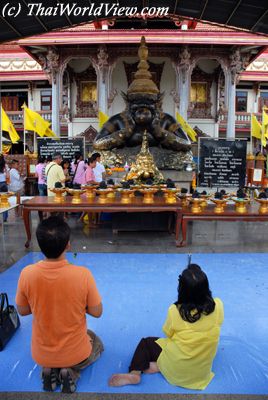 God Rahu Rahu’s devotees in Thailand are buying up a range of such objects, including black chickens, black liquor, black rice and black eggs. 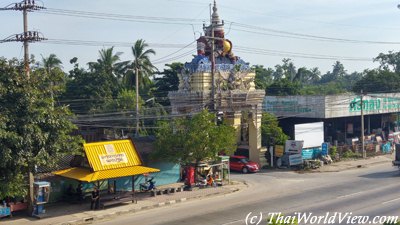 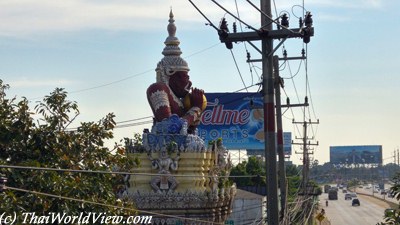 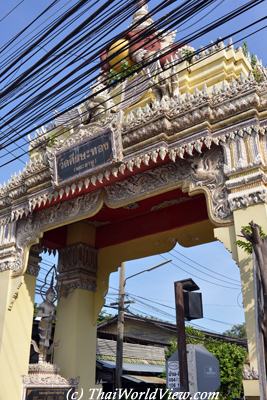 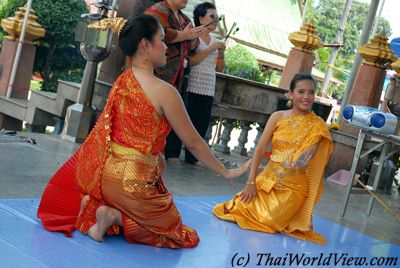 Dancers As as offering to Rahu, some devotees invite dancers to perform in front of Rahu’s statue.

Rahu covers the sun and the moon with his darkness, then it becomes so dark that the people became unable even to identify their places. 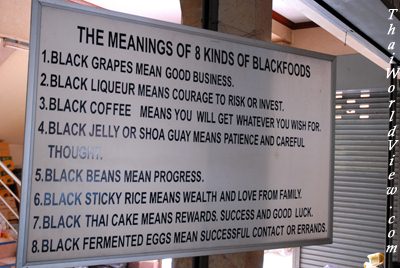 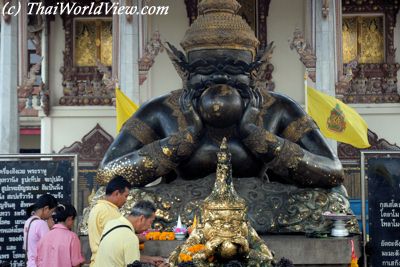 God Rahu Lucky objects are used to ward off evil omens during a solar eclipse in Thailand. Since black is the color of Rahu, black chicken, black liquor, black beans, black eggs, black rice and black moss sticks are thought to be lucky. 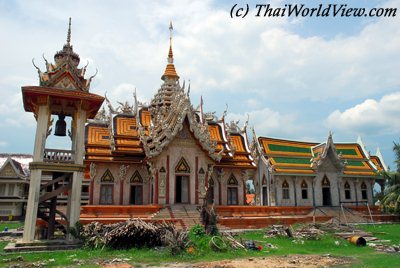 Wat Srisa Thong – วัดศรีษะทอง Some Thai people believe that bad luck always comes with an eclipse, so major changes and big losses are inevitable. Visits to Wat Srisa Thong then become more popular before such event. 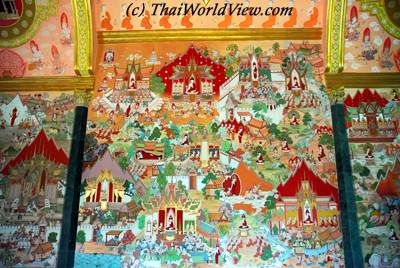 Wat Srisa Thong – วัดศรีษะทอง When an eclipse hits, some people are clashing gongs and exploding firecrackers to frighten away the God Rahu. 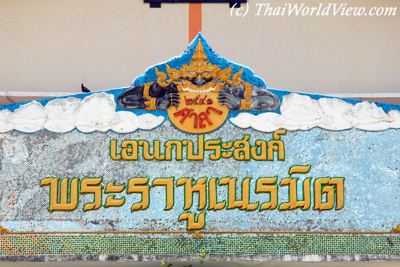 God Rahu According to animist beliefs, an eclipse takes place when the angry God Rahu tries to swallow the sun. The only way to prevent disaster is to scare Rahu away or placate him with offerings. 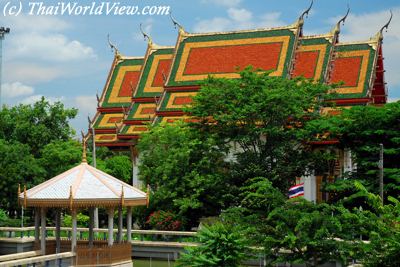 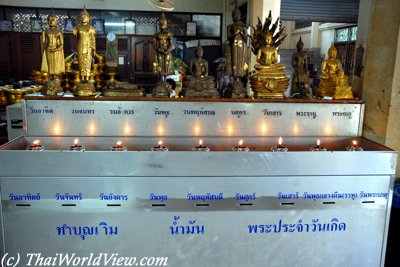 God Rahu In year 1997, the wife of Thailand’s prime minister, Chavalit Yongchaiyudh, announced her intention to make an offering to the god Rahu in the belief that it would preserve the life of her husband’s government. According to a local astrologer, she would offer eight black foods, including black chickens, black beans and Coca-Cola. 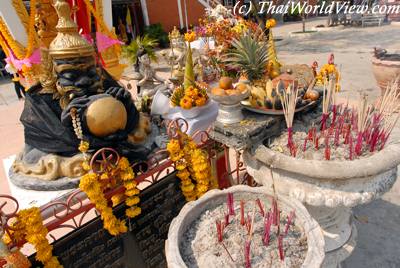 God Rahu God Rahu representations can be seen in many Buddhist temples around Nakhon Pathom (นครปฐม). 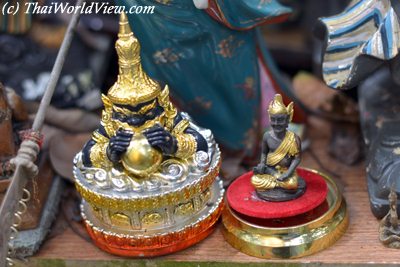 God Rahu God Rahu representations can be seen in many Buddhist temples even in Thai temples located in Hong Kong!

Please enable JavaScript to view the comments powered by Disqus.