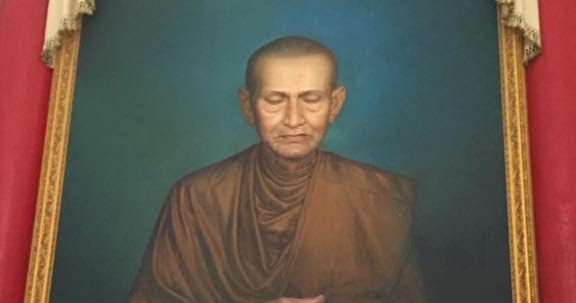 Somdej Toh or Archan Toh was born on 17th day of April in 1788 (B.E.2331), in a small village of Kamphaeng Phet Province of the Chakri Dynasty, known formally as Phra Buddhachan Toh Phromarangsi, he was born before his father became the King. Among devotees he is addressed as Somdej Toh or Archan Toh, he is one of the most beloved and famous Buddhist monks during Thailand’s Rattanakosin period in Thailand ruled under King Rama. Somdej Toh is a venerable person in Buddhism. Somdej Toh was named “Toh” before his monk hood and then “Phromarangsi” as his ordination-name.

When Somdej Toh ordained as a novice at the age of 12. His family took him to Wat Nibbanaram – currently Wat Mahathaad in Bangkok, a temple right across the road from the Grand Palace. At the age of 21, in 1807 (B.E.2350), he ordained as a monk under the Royal Patronage at Wat Praseeratanasasadaram (Wat Prakeo) in Bangkok. Later he refuge in Wat Rakang ability to further his knowledge, he studied hard at the temple on philosophy in Buddhism and various Buddhist scriptures. Well-versed in Buddhist teachings, he was also named as Maha Toh, the King monk.

He was noted for the skill of his preaching and Thai poetry to reflect the beauty of Buddhism. He studied the Buddhist scriptures of Pali scriptures with several Buddhist masters. A shilled meditator with closed connection with the royal family, Somdej Toh was famous for his wide popularity of his humble, despite his ranking and considerate, he was easily approach for communicating with advices and offered blessings with people at all levels of life. After becoming a well-known monk, he became the preceptor for Prince Mongkut, Prince Mongkut later became King Rama IV of Thailand.

When Prince Mongkut was ordained as a monk. Somdej Toh was his senior monk, the one who taught him initially in Dharma and Vinaya. Soon after Prince Mongkut was appointed to a clerical post, his father the present King passed away. The Privy Council appointed one of his brother as King Rama III in place of his father. Somdej Toh in the course of his studies in Buddhist practice. he decided to leave Bangkok and went for “Thudong” alone, deep into the jungle to the border of Thailand, Laos and Cambodiafor more than 2 decades. Thudong is a monk’s journey to gain knowledge to build up good karma and to know the teaching of Buddha. Prince Mongkut remained in the temple as a monk for 20 years. When King Rama III (his brother) passes away, Prince Mongkut was then offered the throne. So Prince Mongkut disrobed and was reign as King Rama IV.

As time goes by, in the year 1860 (B.E.2403), when King Rama IV built the Holy City Hill named “Phra Nakhon Khiri Royal Palace” locally it is known as Khao Wong or Palace Hill in Phetchaburi province, the King Rama IV invited the country monks for the opening ceremony and celebration in a grand manner. Among the monks, the King gave the order decree to fetch Somdej Toh back to Bangkok from Thudong. Royal Officer were sent out into the forest to look for him, or bring back any monk they could found. Finally the topic been brought to his attention, Somdej Toh voluntarily intended to returned back to Bangkok after 20 years of Thudong. He was invited for the ceremony, Somdej Toh set off his journey with a boat to Bangkok for the celebration, while on his way there was a sea storm occurred. Somdej Toh step out in front of the boat and with his virtue of prayer he waved his hand toward the sea. The wind died down and the sea storm was completely calm. It can said that with his prayer even the wind and the waves obey him. Somdej Toh had long been the favourite of the King. After that occasion, King Rama IV appointed him to be in charge of Wat Rakang, and provided him with the title of “Somdej”, is a high rank title a monk hold. After receiving the title his name was revealed as Somdej Toh until today.

During King Rama IV reign year 1864, Somdej Toh was given the ceremonial name Phra Buddhacharn Toh Phromarangsi. Another contribution of Somdej Toh is the Chinabanchorn (Jinnabanchorn) Katha. This Katha was an ancient Buddhist katha, which Somdej Toh received from an old scroll from Sri Lanka. After having the Katha, on some occasions Somdej Toh editing and rewrite to improved the Katha scriptures from the original one making it easier to pray. The Katha is named “Chinabanchorn”, which is the same name to Tao Maha Phrom Chinabanchorn. Somdej Toh used this katha for ceremony chanting, blessing and meditation all the times whatever he do. Chinabanchorn Katha is known as the most powerful Katha of all and believed to be the supreme Buddhist spell because the words of this Katha invited the magic power of Lord Buddha Somdej Phra Sammasam Buddhachao, other Lord Buddhas and Phra Arahants. Phra Somdej amulets generally is good for protecting the worshipper from avoidance of misfortune, accident, disaster, dispelled black magic, evil spirits and ghosts.

There is one story tells early in his reign. There was a time, before Somdej Toh went for Thudong, he went to reside at Wat Rakang to further his studies. The night before, abbot of the temple dreamed that a white elephant was moving toward th direction of the temple and devoured all the scriptures in a boxes, the abbot was awaken by the horrifying dream, the next morning he felt that a conclusion must be some unusual visitor will come to the temple to take refuge that day. As it happened as he thought about, at the same day a devotee came to the temple of Wat Rakang to invited the abbot to perform a religious ceremony out of the temple. Before the abbot left, he instructed a novice monk in the temple that if there were visitor who visit the temple that day, they must use all effort to retained him at the temple until he come back. On that day, when Somdej Toh arrived at the temple of Wat Rakang, the novice monk told him the incident and requested him to wait and stayed for his abbot to come back.

Somdej Toh was amazed with the incident, but he however stayed on and wait for the abbot to get back. After a moment, the abbot returned in a hurry and asked the novice monk is there any visitor who came to the temple. Somdej Toh was even more surprised and asked the abbot how come he knows that he will visit the temple on that day. The abbot told him of his dream and Somdej Toh immediately greet and pay respects to the abbot. When the abbot saw Somdej Toh he knew that Somdej Toh was an unusual person, with his head appeared larger than the rest of other monks, he will become a very outstanding monk and accepted him as his disciple. Somdej Toh were popular for his knowledge in both holy Dhamma and Visha (magic). The abbot taught Somdej Toh everything he knew until the last day of his life.

n Thailand, whenever the monks attend a prayer chanting ceremony they will carry a holy fan, these fan describe their ranking statue. Before any ceremony start, the holy fan will be raised in front of the monk’s before chanting the verses. One day the King of Thailand invited Somdej Toh to conduct a bliss seeking prayer ceremony at a temple. Somdej Toh was holding his holy fan standing at the river bank when he intended to get a boat to get across the river. The area boat-man around there would normally provide Somdej Toh a free trip without charge because they know him well. On a particular day, a boat-man who came from some where else that did not know Somdej Toh provide him a ride across the river and ask Somdej Toh for the boat fare. As he know that the boat-man is just making a living, he offered his royal sealed holy fan to the boat-man as the fare. When Somdej Toh arrived at the temple the royal guards get confused as why Somdej Toh did not carry the holy fan with him and thought that he might had forgotten to bring it along.

There was a day when Somdej Toh was taking a short afternoon nap, he notice that somebody have entered his room by the corner of his eye, he realized that it was a thief. He keep unknown and pretended asleep and did not bother with the thief. When the thief is about to leave, he saw a small gift box on the wall shelf near where Somdej Toh is sleeping. He intended to get the small box from the shelf but scare it may wake up Somdej Toh. The thief try hard to achieve the small box, but he failed to get it. Somdej Toh suddenly woke up to get the small box and hand it to him. The thief was confused when he see Somdej Toh gave him the small box without anger. He bravely asked Somdej Toh why he gave the small box to him, Somdej Toh told him, you are here for your neediness that why you came here, this small box belongs to me and I have to take care and look after it everyday. Now that you want it, I shall let you have it and I will be free from taking care of it. We came to this world without bringing anything with us, and we will not be taking anything with us when we leave. So why should we have to tied ourselves so much in this human world?

Because of his power of meditation and prayer, he created amulet of Phra Somdej reputed to be the most popular amulet among Buddhist collectors. The amulets were blessed and chanted by him and other respected famous monks in Thailand. He became famous for his wisdom, a venerable monk who gives Dharma talk to the royal palace and the public throughout the country. After his death there have been many legends concerning that time. He also appears in many versions of the story of the ghost wife Nang Nak Phra Khanong, sometimes referred to as just Nang Nak or Mae Nak. 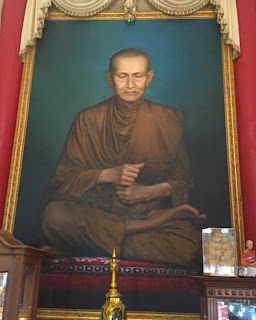