See the Phra Ngang amulets in our online shop.

The Phra Ngang statues and amulets are believed to be originaly from Cambodia,
but their making is nowadays a Thai affair. Few Masters still realize them
and the very nature of these amulets and the entities that inhabit them is open to discussion.

According to the sources one can hear the following versions :

– Phra Ngang would be a ” mountain gods ” from Cambodia, who was later added to the Buddhist pantheon as an “imperfect” Buddha who did not attain complete enlightenment.
This sound much like all the “wrathful deity” in Tibetan Buddhism, that are often local gods modified to fit in the Buddhist system of belief.

– Phra Ngang would be a “King of the spirits”, so a kind of very powerful and greedy ghost.

– Phra Ngang was a friend and disciple of the Buddha who during his life had a big problem to meditate in peace because it was so beautiful that many women came to offer him although
he was a monk. He then engaged in a solitary meditation practice and wished to lose his beauty so that he could practice the Dharma for the good of all sentient beings and then changed into a kind of hideous dwarf with red eyes and big ears. Beings throughout his life in this weird form, he was teaching the Dharma to the poor in the villages, and at his death he vowed to help those who wear his effigy … which explains the strange appearance of the statues and Phra Ngang amulets.

– Phra Ngang would be the ghost of a great Warrior, dead in battle protecting his familly
and determined to protect all those who pray him. He would thus have reached the level
of a Deva and could manifest himself through his images (statues and amulets)

– and lastly, some say that the first Phra Ngang amulets were very primitive Buddha amulets (Phra Chai), worn by some fighters during the battles of Ayuthaya period. After the battles,
the monk would come, collect the bodies and find those amulets, often with their top bent
and with their eyes caked in blood. It was decided to transfer the spirit of those dead warrior into the amulets, so that they could amend for their sin
(killing people, even on a battlefield, IS a sin)
and accumulate merits by helping the wearer of the amulet for a period of time.
This last version explain all aspect of Phra Ngang and is IMHO probably the only real one,
it explain all aspects of this amulets (the bent hat, the red eyes, the weird powers…)

When i asked questions about Phra Ngang to some higtly learned Masters, their answer
was along the line “Ah, yes, the weird little black magic Buddha look alike amulet ?
Those are false amulets made to be sold to gullible people of Hong Kong
and Singapore only !” 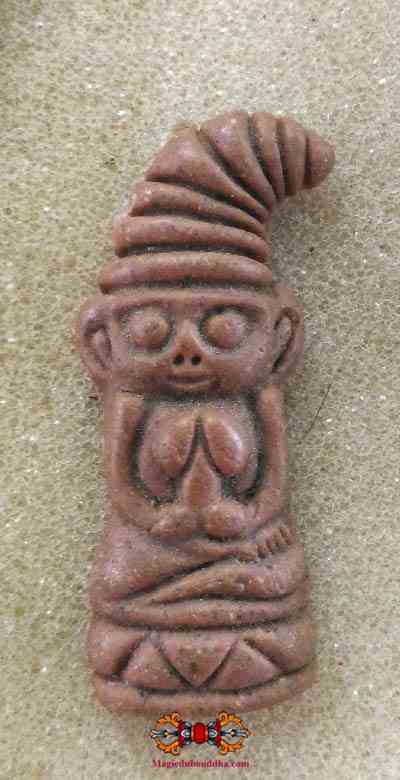 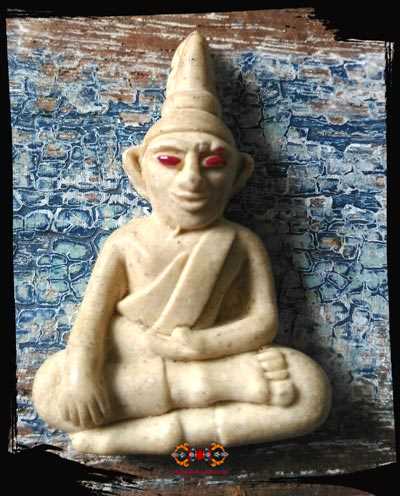 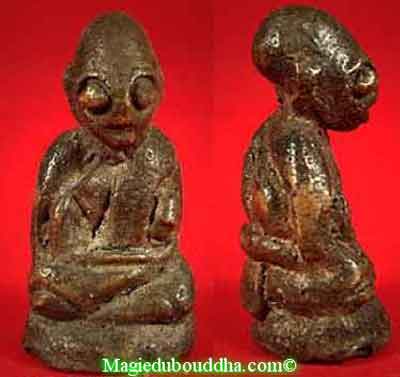 The very rare Phra Phrom Sor Rod amulets (above)
should also not be confused with Phra Ngang. 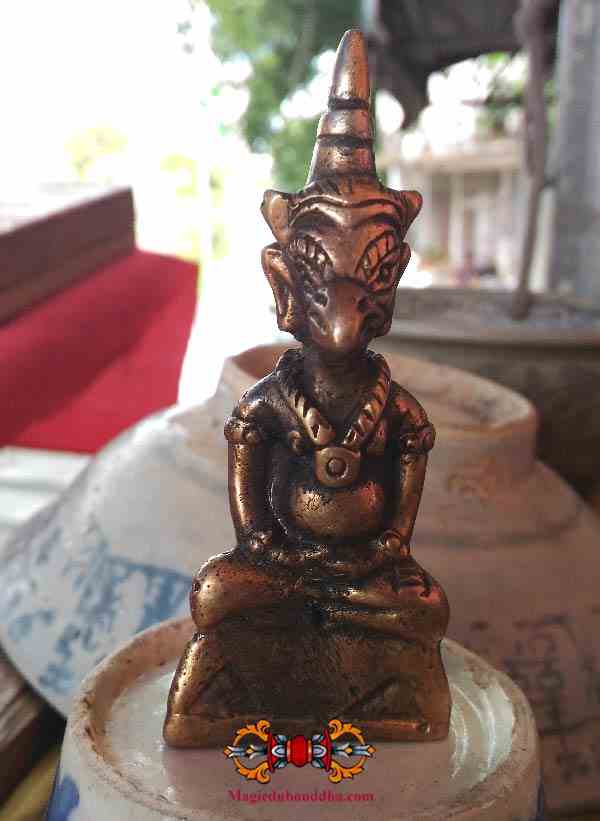 Some clearly evil and stupid magic practitioners equate Phra Ngang’s practice with Dark Magic and use Phra Ngang amulets in an absolutely disgusting way, including placing them in used sanitary napkins or by introducing them into the vagina of women having their periods.
Those people believe that “Phra Ngang like blood” and will also do blood & alcool offering
to their Phra Ngang.

Such practices ALWAYS lead to deadly results for those who engage in them.
In addition, a Phra Ngang amulet that has suffered such abominations is “polluted”
and should not be used later. It is therefore absolutely necessary to avoid using
an old Phra Ngang amulet if it is not declared “clean”
by a person who practice meditation & magic
and who can “feel” such things. 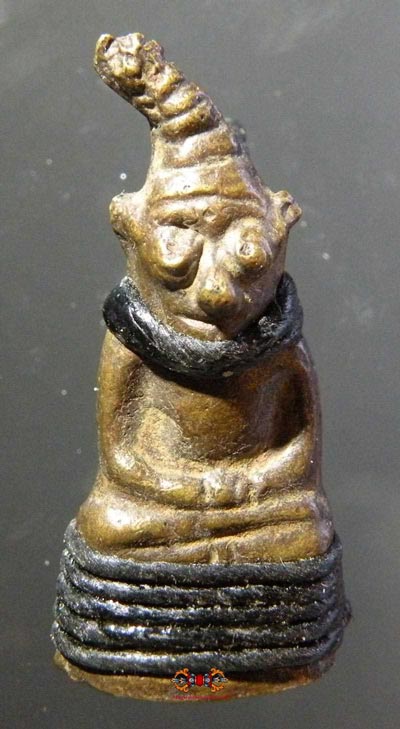 An ancient Phra Ngang re-blessed by Most Venerable LP Seuar. 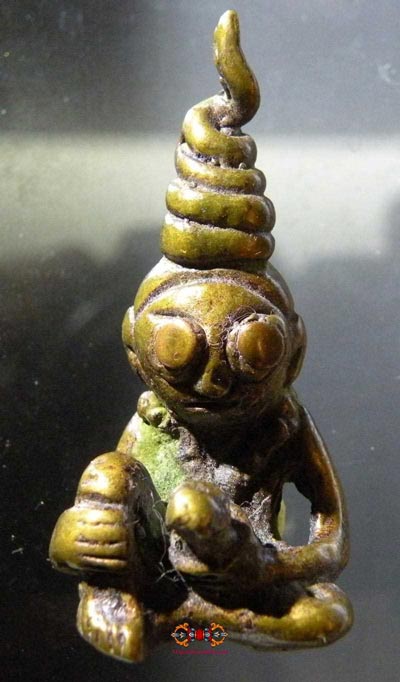 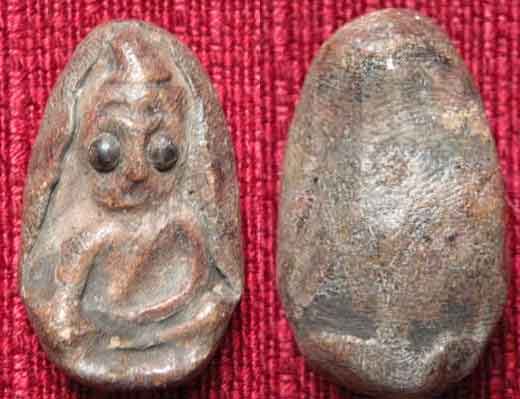 – Magic Shields: Unhealthy entities and physical dangers can not reach you.
When you have established a good connection with Phra Ngang (it can take months or even years), it may happen that it decides to draw on your body Yant protection during your sleep, then you may feel a finger moving on your body in a state of half-sleep, do not worry if it happen to you it is an excellent sign and proof that you are protected by Phra Ngang .

– Charm spell : Phra Ngang can make you very attractive to help you find the perfect companion or companion. However, do not abuse it for a purely sexual purpose and thus go against the beneficial will of Phra Ngang because the negative Karma generated come back very quickly and you would regret bitterly having abused this power.

– Spell of Protection: The spells used against you will be without effects and will “rebound”
on the one who launched them.

– Blessing of magical charming oil : Intended to make its user more convincing
(a seller, a politician, or someone who look for a job or a lover).
The effect of the oil produced lasts about 2 to 3 hours.

– Spell of fortune: Enriches little by little without side effect and without generation of negative Karma.

– Search Spell: Allows you to search for a person by his / her mind.
We can therefore look for a lost person still alive or come into contact with the spirit of a dead person to stop the phenomena of haunting. We must first make sure that Phra Ngang agrees to give his help and not insist if he refuses.

– Healing spell: Helps to heal benign and / or chronic diseases on both animals and humans.
DO NOT use this spell on serious diseases and make sure that Phra Ngang agrees to give his help, if he refuses do not practice the spell.

With each Phra Ngang offered on Magiedubouddha.com i am providing the detailled rituals concerning all those spells.

The correct practice of Phra Ngang requires rigor but is very fruitful
if you undertake it with a good heart and a pure motivation.

Phra Ngang’s practice is as follows :

Singing Phra Ngang’s Khata every evening at regular times, so as to benefit from his protection for the day ahead.

When chanting the prayer, one has to take the amulets (or statue) in his hands and be on his knee.

If you make a mistake when chanting the prayer, start it all over again.

You have to practice every day if you want to have a result.

Take your Phra Ngang with you wherever you go, keep it in a small cloth bag, in one of your pockets . So he can warn you of the dangers surrounding you (he might vibrate or get hot in such case) and give you positive insights that you will quickly learn to recognize.

After reciting the prayer, it is necessary to speak briefly each day about the events of the day that touched your loved ones to your Phra Ngang so that he knows you and knows
how to help you.

Do not place the Phra Ngang in a closed reliquary (unless the Master who made it did it himself) because it would work less well, a reliquary with a “breathing hole” is OK.

When you wear your Phra Ngang it is absolutely necessary to avoid any vulgar language,
and especially not to curse someone or threaten him, because Phra Ngang might want to help you and harm this person, not realising it is doing something evil.

NEVER make disgusting offerings (such as human blood) to Phra Ngang
even if some ” connoisseurs ” recommend it to you.
Such offerings transform the very nature of Phra Ngang
and make it a very dangerous parasitic entity capable of creating you the worst troubles.

NEVER ask Phra Ngang to harm someone because the return of the negative Karma generated would be extremely fast and even tenfold !

The texts of the prayers and rituals are provided to Phra Ngang buyers , I do not put them on line and do not give them by Email because I will be partially responsible for your actions
and share the negative Karma produced in case of misuse or recitations by people with false amulets or Phra Ngang amulets “polluted” by repugnant offerings made in the past.

I certify the Phra Ngang offered on Magiedubouddha.com as being “pure”
and safe for their user as long as used properly.

See the Phra Ngang amulets in our online shop.