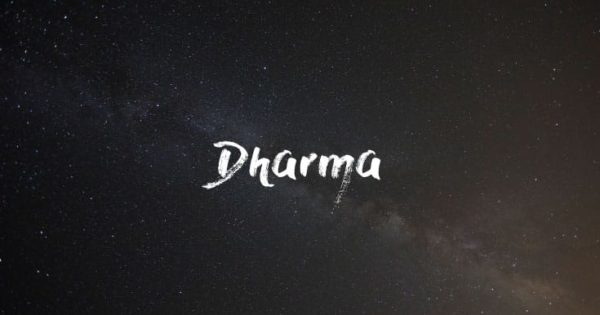 According to Reginald A. Ray, dharma is a fascinating term because it integrates several levels of experience, from our first moment on the path to the achievement of full realization.

The Sanskrit word “dharma” is without doubt the most important and most commonly used term in Buddhism. Among the three jewels of buddha, dharma and sangha in which all Buddhists take refuge, the dharma is pre-eminent. It is a realization of the dharma that produces buddhas and it is the dharma that provides the pretext for the sangha (community) and binds it together.

But what does the word “dharma” actually mean? This is a particularly fascinating term, because it includes and integrates several levels of experience, from our first moment on the path to the achievement of full realization.

In the early Theravadin texts, Buddha Shakyamuni is reported to have remarked that the dharma is always present, whether or not there is a buddha to preach it or a sangha to practice it. Dharma in this sense is the underlying, substratum of reality-of our lives and of our world. It is the ultimate and primordial fact of who and what we are.

It is the goal of all Buddhists to uncover this “true nature,” as it is called-not just to glimpse it, but to be able to rest in it, identify with it, and forget any other “self” that we may have imagined. In such a realization, we see that what we most essentially are has no beginning and no end, and expresses itself in universal love.

Is this eternal dharma inaccessible to us ordinary people? Not at all. In fact, it is always hovering at the periphery of our consciousness, whether we are Buddhists or not, or whether or not we have any apparent interest in spirituality at all.

The Buddhist scholar Th. Stcherbatsky wrote an early, influential book entitled The Central Conception of Buddhism and the Meaning of the Word “Dharma.” In this work, the author tells us that dharma is the basis of our ordinary existence-of the multitude of thoughts, perceptions, and occurrences that make up our experience as human beings.

Get even more Buddhist wisdom delivered straight to your inbox! Sign up for Lion’s Roar free email newsletters.

Here, a distinction needs to be made between our concepts of what ordinary reality is, our preconceptions and wishful thinking, and its raw, implacable facticity. Dharma in this second sense is what is so in our lives, whether we like it or not, whether we wish for it or not, whether we expect it or not. Sudden illness, the breakdown of a relationship, and unexpected death are all expressions of the breakthrough of dharma in this sense. But so also are the light that fails to go on when we flip the switch, the unanticipated phone call, the surprising joy of seeing a newborn child. And so is the sudden shock of seeing someone else as more-or less-than we thought.

All such events bring us up short. They reveal just how much we have been locked up a dream of our own making, a dream of who we are and what the world is like. They wake us up, if only for a moment. It is in this sense that the great Tibetan master Atisha tells us that, “All dharma agrees at one point.” All that occurs, when seen in its own light and from its own side (dharma), proclaims the unreality of our fixed notions of ourselves and our world. The dharma as phenomena is thus finally not distinct from the eternal dharma. The nakedness and starkness of phenomena, as they are, represent the breakthrough of the eternal dharma into our lives.

Dharma as the Path

How we respond to the disruption and destabilization caused by the eternal dharma, as it shows up in the experiences of our lives, is a matter of choice.

For example, we may fall into avoidance and denial, seeking to reconstitute our solidity, comfort and security. Or we may see in the dharma a harbinger of ultimate reality, and turn to it as the path. The first approach leads us to deny what we have seen and to pretend things are otherwise. This results in to further bondage, to increased confusion, negative karma, and suffering. The second leads, to recall the words of the Theravadin meditation teacher Ayya Khema, not to the elimination of suffering but to the gradual dissolution of the one who suffers.

In the beginning, the path is difficult and painful: through meditation and the other Buddhist disciplines, we train by bringing ourselves back again and again to the uncomfortable edge of the dharma, to the ambiguity and groundlessness of the present moment. In time, however, we find in such returns solace and relief. At this point, in Trungpa Rinpoche’s felicious phrasing, the path of dharma begins to unroll naturally and effortlessly beneath our feet.

Finally, in its most concrete sense, the dharma is the teachings delivered by the Buddha and added to by countless generations of accomplished and realized men and women. This dharma describes, points to, and evokes the eternal dharma as it appears in our unadorned and uninterpreted life experience.

Originally and most essentially, the dharma teachings were the words spoken and sung by the realized ones. Sutras, the words of the Buddha, always begin “Thus have I heard” not “Thus have I read.” In the same way that one could not expect to become a world-class pianist simply by reading piano manuals or a cook simply by reading cookbooks, one must receive the dharma teachings by hearing them from a teacher. To learn the dharma, we must hear the nuances and subtleties; we must experience the eloquence and the flights of those steeped in living understanding and realization.

It is said that the Buddha and the later teachers tailored their discourses to the specific needs of their listeners. They spoke the reality of dharma in a form that could communicate to their listeners. This “tailoring” was not, we may be certain, particularly deliberate or self-conscious.

When teachers give voice to dharma nowadays, they often draw on textual tradition. But at the same time, the words that form in their minds, the images, analogies and logic, are drawn from the atmosphere, they are reflections of and address everyone in the room, and they express the unique configuration of reality that exists in that moment.

The spoken dharma is infinitely more nuanced, evocative, and communicative than anything written could be. It carries an abundant and pregnant burden of meaning that is instantly received in its totality by the listeners. Hearing Sri Lankan, Zen or Tibetan monks chant a Buddhist sutta is an entirely different experience from reading it in print. Through the recitation, a world is suddenly opened and we are immesed in an atmosphere and a feeling that are complete.

In listening the dharma, it is not so unusual to hear a teacher describe a scene, say, from the life of the Buddha, and to find ourselves, before the description is half begun, feeling the coolness of the Indian night and smelling its rich, sweet and pungent scents. It is true that, beginning the in the first century BCE, the dharma began to be written down and now exists in tens of thousands of pages in the various Asian canons. At the same time, it is important to remember that the dharma as teaching is most fundamentally a spoken truth, of which the written word is an analogue and a support.

Particularly for Western Buddhists, the written word is often the initial gate to the vast world of dharma within. Often a book leads us to encounter a Buddhist teacher from whom we may hear the dharma in oral form. Often that teacher encourages us to undertake the path, engaging in the practice of meditation. This, in turn, begins to lay bare the raw and rugged character of our ordinary lives. As we make a fuller and fuller acquaintance with our lives, we may begin to sense the background of awareness that runs like a thread through all our experience. As our sense of this awareness-known as buddhanature-deepens, we begin to realize that, more than anything else, this is who we most fundamentally are and always have been.

At this point, we have journeyed from seeing that dharma as an interesting book to discovering the eternal dharma as the final truth of our own inherent nature. The entire path, then, is encompassed and summarized in this single word.

Can you help us at a critical time?

COVID-19 has brought tremendous suffering, uncertainty, fear, and strain to the world.

Our sincere wish is that these Buddhist teachings, guided practices, and stories can be a balm in these difficult times. Over the past month, over 400,000 readers like you have visited our site, reading almost a million pages and streaming over 120,000 hours of video teachings. We want to provide even more Buddhist wisdom but our resources are strained. Can you help us?

No one is free from the pandemic’s impact, including Lion’s Roar. We rely significantly on advertising and newsstand sales to support our work — both of which have dropped precipitously this year. Can you lend your support to Lion’s Roar at this critical time?