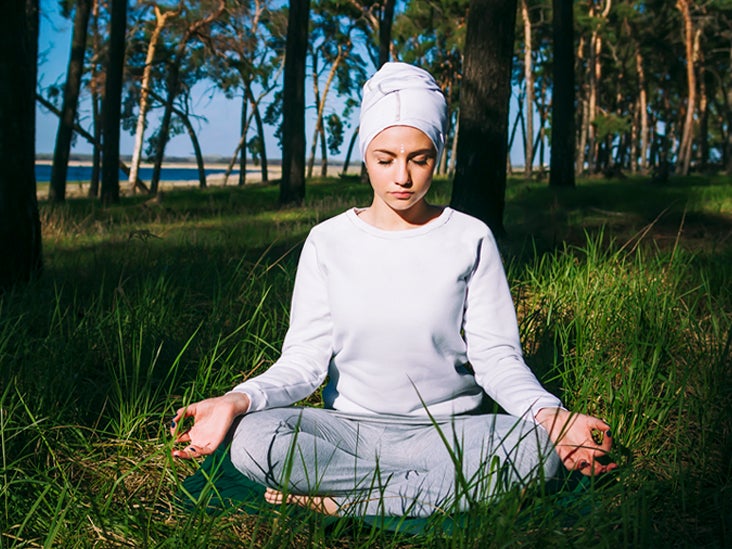 “Kundalini” is a Sanskrit term meaning “coiled,” and it refers to a specific type of meditation that’s believed to have the ability to fully awaken your potential for awareness.

According to the theory behind Kundalini meditation, life energy lies at the base of your spine (root chakra), coiled like a snake — and that’s where its name comes from.

In Kundalini meditation, you can work to awaken this energy and achieve enlightenment through a combination of techniques, including:

These exercises are said to rouse dormant energy in your body and move it along your chakras (energy centers) until it reaches the point of release at the seventh (crown) chakra, your head.

This release of energy promotes internal balance, awakening, and enlightenment.

Kundalini practices are at least a few thousand years old, though scholars don’t have an exact date of origin.

Kundalini teachings first appeared in The Upanishads, a collection of Hindu religious texts. Estimates suggest composition of these sacred writings began somewhere around 800 to 500 B.C.

In its early stages, Kundalini was a private philosophy. Only students who had spent years studying meditation and spirituality were given the opportunity to learn from Kundalini teachers.

Even when Kundalini evolved from meditative teachings to include physical practices (yoga), it remained unknown outside of these select teachers and students.

This was the case for thousands of years, until Yogi Bhajan began teaching Kundalini yoga, which involves Kundalini meditation, in the United States.

Introduction in the West

In 1968, Yogi Bhajan ended the secrecy around Kundalini by introducing Kundalini yoga — of which Kundalini meditation is a big component — to the Western world.

He believed this would help people see improvements to their life and overall well-being by giving them the opportunity to experience a different type of consciousness.

Over a period of more than 30 years, he taught thousands of meditation and yoga techniques and founded the Kundalini Research Institute, where he trained other students to become teachers of the practice.

In 2020, several people who’d previously practiced under Bhajan or worked closely with him came forward with allegations of sexual, physical, and emotional abuse against him. While many practitioners still believe in the benefits of Kundalini yoga, there are questions about what the future of Kundalini yoga should look like.

People who practice Kundalini meditation report experiencing a range of benefits. These include:

Some of these benefits are supported by research that looked at Kundalini yoga, which typically involves Kundalini meditation:

With thousands of techniques to choose from, Kundalini meditation can get a bit complicated. If you’d like to use it to address a certain concern, a teacher can offer guidance on specific techniques.

Kundalini meditation is a comprehensive approach, so if you’re new to meditation, it may help to try it first with a practitioner or follow along with a guided meditation.

Still, you can try the basics on your own:

People often practice Kundalini meditation specifically to experience the release of energy known as a Kundalini awakening. Many people find this somewhat of a spiritual experience, but it might sound a little overwhelming if you don’t know what to expect.

During a Kundalini awakening, people report physical sensations, such as warmth or tingling, disorientation, and some temporary discomfort.

All that aside, Kundalini meditation does involve deep breathing exercises and slowed breathing. If you aren’t used to this, you may feel dizzy or lightheaded.

Take breaks when you need to, and drink plenty of water before and after meditation.

Kundalini meditation can have benefits, even when it doesn’t lead to a full-blown awakening. In fact, some practitioners consider it one of the most powerful forms of meditation.

You may notice some improvements in wellness right away, but patience and dedicated practice can help you achieve the most benefits.

Crystal Raypole has previously worked as a writer and editor for GoodTherapy. Her fields of interest include Asian languages and literature, Japanese translation, cooking, natural sciences, sex positivity, and mental health. In particular, she’s committed to helping decrease stigma around mental health issues.