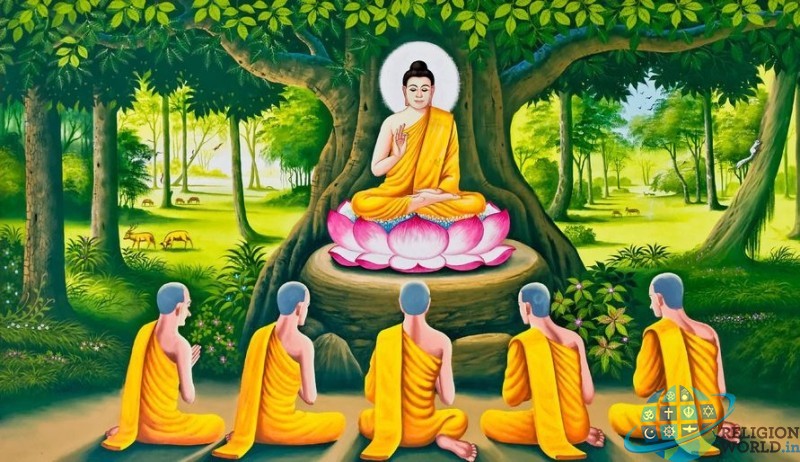 The teaching founded by the Buddha is known as Buddhism.

The term Buddha literally means enlightened one, a knower. Buddhists believe that a Buddha is born in each aeon of time, and our Buddha—the sage Gautama.

Gautama was born the son of an Indian king on the border of modern Nepal 623 years before Christ. The wise men of the kingdom foresaw that he would become either an emperor or a Buddha, and his father, wanting him to be an emperor, kept him utterly secluded from all unpleasant things, so that he might not become wise by seeing life.

But destiny had other plans, Gautama must become the Buddha, and so the Gods visited earth in various forms to let him see them. On three successive days, while on his way to the royal park, Gotama saw an old man, a sick man, and a corpse, and thus he learned that men—all men—must suffer and die.

On the fourth day he saw a monk; from this he understood that to learn the way of overcoming man’s universal sorrow lie must give up worldly pleasures. Accordingly, in his twenty-ninth year, he renounced his kingdom and became an ascetic.

All the teachings of the Buddha can be summed up in one word: Dhamma. It means truth, that which really is. It also means law, the law which exists in a man’s own heart and mind. It is the principle of righteousness. Therefore the Buddha appeals to man to be noble, pure, and charitable not in order to please any Supreme Deity, but in order to be true to the highest in himself.

Buddhism is not a Religion

Buddhism is not a religion at all, in the sense in which the word is commonly understood. It is not a system of faith or worship. In Buddhism, there is no such thing as belief in a body of dogma which must be taken on faith, such as belief in a Supreme Being, a creator of the universe, the reality of an immortal soul, a personal savior, or archangels who are supposed to carry out the will of the Supreme Deity.

Buddhism begins as a search for truth. The Buddha taught that we should believe only that which is true in the light of our own experience, that which conforms to reason and is conducive to the highest good and welfare of all beings. Men must rely on themselves.

Even though he may “take refuge in Buddha,” the expression used when a man pledges himself to live a righteous life, he must not fall victim to a blind faith that the Buddha can save him. The Buddha can point out the path, but he cannot walk it for us.

The goal of Buddhism is a state of lasting, unconditional happiness known as enlightenment.

According to Buddhism, the only thing that is always present is the awareness in which all these experiences and phenomena appear. This awareness is not only timeless but also inherently joyful.

To recognize this timeless awareness here and now means to become enlightened, and it is the ultimate goal of Buddhism.

Buddhism inspires us to take responsibility for our own lives, without moralizing, by understanding cause and effect (karma). Just like gravity, the law of karma functions, everywhere and all the time.

In Buddhism, compassion and wisdom go together. Practicing meditation regularly, we get more space in our mind, and distance from difficult thoughts and feelings. This allows us to see that everyone has the same basic problems as us, and we strengthen our compassionate wish to try to do something to help others.

The Buddha was special because he was the first person to attain full enlightenment in recorded history. But there is no essential difference between the Buddha and us. We all have a mind, and we can all attain liberation and enlightenment by working with our minds.

Our body, thoughts, and feelings are constantly changing. Buddhism views them as “empty” — empty of any lasting essence, meaning that they are no basis for a real, separate ego or self. The state of liberation comes when we not only understand this intellectually but experience it in a deep, lasting way. With no solid ego we stop taking things personally. We gain an enormous space for joyful development, without the need to react to every negative emotion that comes by.

Enlightenment is the ultimate goal in Buddhism. All positive qualities — especially joy, fearlessness, and compassion — are now fully perfected. Here, our awareness is all-encompassing, and not limited in any way. With no confusion or disturbance in our minds, we benefit others spontaneously and effortlessly.

Not only this, but Buddhism also teaches that with the attainment of Nirvana in this life itself, through enlightenment and true wisdom, one can reach the end of this chain of rebirths.