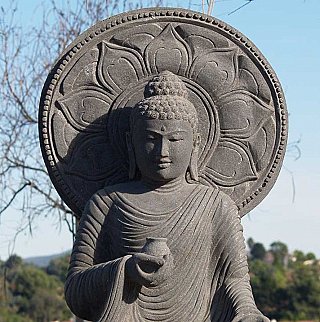 Having regained his physical strength, Siddhartha went to the site of Bodh Gaya, where he seated himself under a tree to meditate, vowing not to move until he had attained Enlightenment. During his meditation he was assailed by doubts, temptations and terrifying visions sent by Mara, the personification of desire, but Siddhartha sat unmoved throughout.

Finally Mara himself appeared to taunt him, asking the Bodhisattva to produce evidence of his accumulated merit. In answer, he simply lowered his right hand to touch the earth. At his touch, the earth goddess spoke in a voice like thunder, saying ‘I am his witness’, and defeated at last, Mara and his armies of demons retired.

After the retirement of the demons, Siddhartha continued his meditation. In his mind’s eye he looked far beyond his own country, far beyond his own world. Soon the sun, planets, the stars out in space and distant galaxies of the universe all appeared in his meditation. He saw how everything, from the smallest speck of dust to the largest star, was linked together in a constantly changing pattern: growing, decaying and growing again. Everything was related. Nothing happened without a cause and every cause had an effect on everything else. 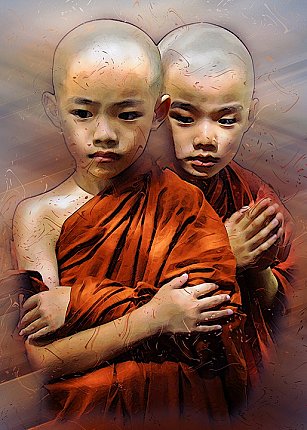 As he saw how everything was connected in this way, deeper truths appeared to his mind. He looked deeply into himself and discovered that his life as Siddhartha the Prince was but the latest in a series of lifetimes that had no beginning – and that the same was true of everyone. We born, live and die not one time, but again and again. He saw that death is only the separation of the mind from its present body. After death the importance of Karma is central to the next journey.

The dramatic moment when Siddhartha overcame desire is represented in various forms of Buddhist art like Buddha statues and Buddha images by the ‘touching the earth’ gesture (bhumisparsha mudra), in which the Buddha, seated in the meditation posture, lowers his right hand, palm inwards, so that his middle finger touches the earth.