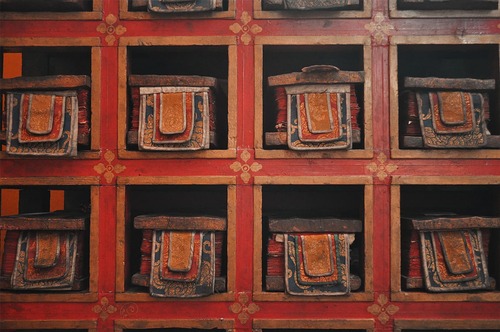 The second truth looks at the true cause of all of this unhappiness that we experience. We don’t need to bring in anything like rebirth here at this point; instead we can try to understand what Buddha was explaining in a simple, logical way. We talk about suffering and ordinary happiness, and these come from causes, but Buddha was interested in “true causes.” We might think that happiness and pain come to us as a reward or punishment or things like that, but Buddha spoke of the true cause as destructive and constructive behavior.

What is meant by destructive behavior? Is it just about causing harm? When we talk about causing harm, it can be in terms of harm to others, or harm to oneself. It’s actually very difficult to know the kind of effects our behavior might have on others, whether it will harm or help. For instance, we might give someone a huge amount of money and, as a result, someone else who wants to steal the money murders them. Our aim might be to help them, but there is actually no guarantee. What is certain is types of behavior that are destructive to ourselves. This is what Buddha meant by destructive behavior – it’s self-destructive.

What this, in turn, refers to, is thinking, acting or speaking under the influence of disturbing emotions. Disturbing emotions, simply, disturb! They cause us to lose peace of mind, and to lose self-control. This refers to anger, greed, attachment, jealousy, arrogance, and naivety, and the list goes on. When our thinking is caught up in one of these emotions, and then we speak or act under the influence of it, it’s going to produce unhappiness for ourselves. It might not be immediately, but in the long term it creates unhappiness, because it builds up a tendency to continue to be like that.

On the other hand, we have constructive behavior, which is behavior not under the influence of these disturbing emotions but may even be motivated by positive emotions, such as love, compassion, or patience.

Acting constructively produces happiness. Our mind is more at ease, and generally we’re calmer. We can usually have more self-control, and so we don’t act in a stupid way or say stupid things that could cause problems. Again, the effect might not be immediate, but in the long term, it creates happiness. Underlying it, however, is a naivety about the way we exist, the way others exist, and of reality in general.

Our ordinary happiness and unhappiness are not rewards or punishments handed down by some external judge-like figure. They follow almost like the law of physics. What is the basis on which behavioral cause and effect rests? The basis is our confusion, especially about ourselves. We think, “Well, I’m the most important person, I should have my way. I should get ahead of the line in the supermarket. I should be first.” We’re greedy to be first, and so we get angry with those ahead of us. We get impatient because the person in front is so slow and takes so long, and our minds fill with all sorts of unhappy thoughts about them. Even if we act in a constructive way, there’s a lot of confusion about “me” underneath that. For instance, we might help others because we want them to like us, or do something for us in return. Or it makes us feel needed. At the very least we want a thank you!

Although helping people like this can make us feel happy, underneath it’s not so comfortable. This happiness we might experience, in the long term, never lasts. It changes to something unsatisfactory. This goes on and on throughout our life, and from the Buddhist point of view, into our future lives as well.

When we look closer, we see that we have confusion about everything. For instance, when we love someone so much, we completely exaggerate their good qualities. Or when we dislike someone so much, we exaggerate their negative qualities and aren’t able to see anything good in them. The more we investigate, the more confusion we find constantly underlying everything that we experience.

Going deeper, we can see that the basis for this is our own limitations. With this mind and body we have, there are limitations. When we close our eyes, it’s as if the rest of the world didn’t exist, that there’s only me. There’s this voice in our head which seems to be “me,” it’s like a me inside of me. It’s quite strange. However we identify with it because it’s the one always complaining, “I have to get ahead; I have to do this.” It’s the one always worrying. It seems to us as though this voice inside our head is special and unique and exists independently of everyone else, because when we shut our eyes, there’s nothing but “me.”

This is a very confused way of thinking because, obviously, we don’t exist independently of everybody else; and really, there’s nothing special about anyone. We’re all people. Imagine a hundred thousand penguins huddling together in the freezing Antarctic: what makes one more special than the other? Actually, they’re all the same. So are we. To penguins, humans probably all look alike! Anyhow, on this basis of thinking, “I’m so special and independent from everyone else,” we have to have our own way, and we get angry if we don’t.

Basically, the hardware of our mind and body is conducive to having this confusion. It might seem weird, but we mainly experience the world out of these two holes in the front of our head. I can’t see what’s behind me. I can only see what is present; I can’t see what came before or what will come later. It’s quite limited. And then we get older, and don’t hear so well. Someone says something and we don’t hear correctly, thinking they said something else and we get angry. It’s quite pathetic, when you think about it.

This all-pervasive problem of ours is that we constantly take rebirth again and again with this type of body and mind, which perpetuate this confusion. On the basis of this confusion, we act destructively, or in an ordinary constructive way, and this is what produces the unhappiness and the ordinary happiness that we experience.

If we go even deeper, it gets complicated and there’s no need to go into it right now, but it’s the confusion itself that drives this uncontrollably recurring rebirth. This is the true cause of our true problems. This confusion, or unawareness, is often translated as “ignorance.” I prefer not to use this word, as it implies that we’re stupid; but this really isn’t the problem, and it isn’t the connotation that we want. Unawareness merely implies that we don’t know how we or how phenomena exist. We are unaware in this sense, like thinking that we are the most important person – the center of the universe – when this completely contradicts reality. The reality is that we’re all here together. It’s not that we’re stupid, but our body and mind make us think the way we do.

This is why we call them the “Noble Truths.” Those who see reality see it differently from the way everyone else sees it. We truly believe that our confusion and the projections we have correspond to reality. We believe them to be true. We actually don’t even think about it, because our instinct is “I’m the most important, I should have my way, everybody should love me.” Or some believe the inverse, “Everyone should hate me, I’m no good.” It’s the same thing, just the other side of the coin. This is the true cause.