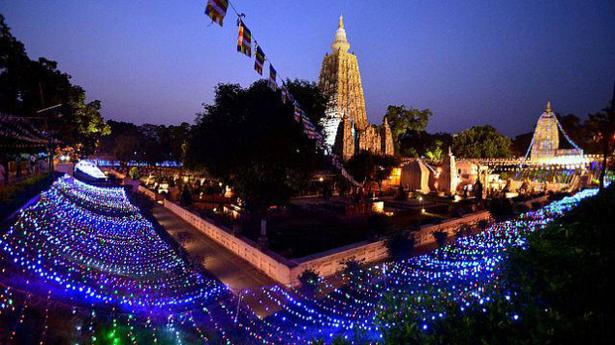 The temple, Bodhi tree, and six other sacred spots spread over 12 acres is a World Heritage site

Among the four places held most sacred by Buddhists, the Mahabodhi temple complex in Bodh Gaya, located about 115 km south of Patna, is the most visited. The other three, Lumbini, where he was born; Kusinagar, where he attained Mahaparinirvana; and Sarnath, where he gave his first sermon, are equally important, but Bodh Gaya is special. It is here Siddharth the restless and inquisitive prince turned Buddha, the enlightened.

The Bodhi tree (Ficus religiosa or Peepal tree) under which the Buddha is believed to have meditated and attained enlightenment is located within this temple complex and venerated.

Emperor Ashoka built the first temple near Bodhi tree during the 3rd Century BCE, almost 300 years after Buddha’s period (566-486 B.C.E). The temple was later rebuilt, and the present structure is datable to the late Gupta period — 6th century CE. Fahien and Hieun Tsang, the Chinese travellers who visited in 5th and 7th century respectively, recorded the existence of the Bodhi tree and the railing around it.

The temple was under worship until the 13th century when it fell into disuse. By that time Buddhism had declined in influence.

The structure slowly went to seed. Only during the 19th century, archaeologists and antiquarians began taking proper notice of Buddhist sites. In 1861, British archaeologists conducted excavations in the Mahabodhi complex and later restored the temple.

The existing structure, which is 55 m tall, is among the oldest brick Buddhist temples in India and occupies an area of 5.5 acres. The temple, the Bodhi tree, and six other sacred spots — together spread over 12 acres — constitute the core heritage zone. This historic area was inscribed as a UNESCO World Heritage site in 2002 for its cultural and archaeological significance.

The Bodh Gaya temple has a unique management structure and is governed by a special legislation.

The Bihar government owns the temple complex and enacted the Bodh Gaya Temple Act in 1949. This special arrangement had to be put in place since the Hindus who had built a Siva temple in the campus many years ago also claimed rights to manage. The government, through this Act, formed a nine-member committee in 1953 with five Hindu and four Buddhist members to run the temple. The District Magistrate heads the committee.

There is a long standing demand to implement the recommendation of the National Commission for Minorities to hand over the management of the temple complex to the Buddhists.

You have reached your limit for free articles this month.

Find mobile-friendly version of articles from the day’s newspaper in one easy-to-read list.

Enjoy reading as many articles as you wish without any limitations.

A select list of articles that match your interests and tastes.

Move smoothly between articles as our pages load instantly.

A one-stop-shop for seeing the latest updates, and managing your preferences.

We brief you on the latest and most important developments, three times a day.

*Our Digital Subscription plans do not currently include the e-paper, crossword and print.