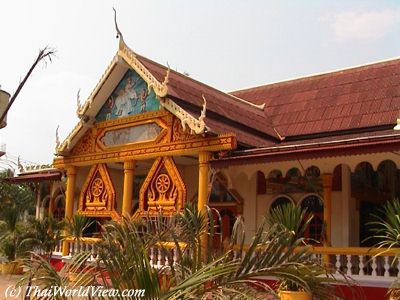 Thai Buddhist temple Everyday monks take care of the temple compound, cut the grass, clean the inside of the buildings, pray, learn and study the Buddha teachings (“DHARMA” – ธรรม), take part in ceremonies and so on… 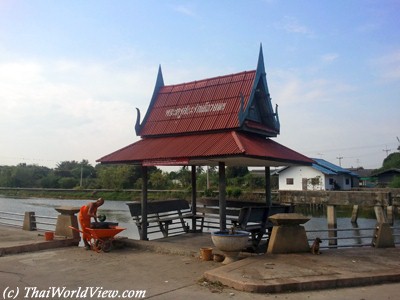 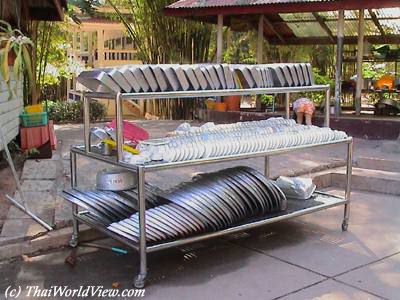 Kitchen in Thai temple In very big temples, food is cooked in the temple by monks and laymen. Food can be obtained by the alms round ceremony ( “TAKBAT” – ตักบาตร) or by people ofeering food in the morning at the temple while the monks are praying.

In the morning after the alms round, while laymen or laywomen are preparing food, monks pray in the “BOT” (โบสถ์ – building which contains the main Buddha image). In the hall for sermons (“SALA” – ศาลา) women prepare the monks plates with the food taken from the alms bowls. Often women who do this task are middle aged women. 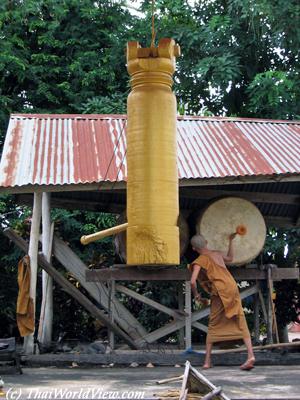 Thai Buddhist temple When meals are ready, a woman or a monk hits a gong several times at around seven o’clock in the morning.

Monks are then coming. The novice monks bring the food tray to the elder monks. Faithful people pray and “KRAP” (กราบ – hand palms closed together and the body is lowered to the floor like crouching) three times. Then meal can start. Monks have to eat a little bit of each plate in order that all the people that did offer food receive some merit (บุญ – “BUN”). 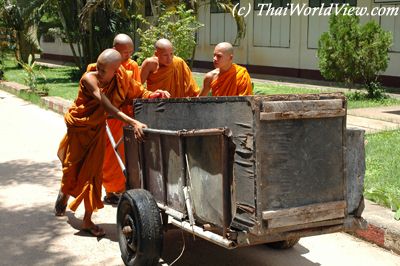 Monks helping each other Every day, monks take care of the temple compound, cut the grass, clean the inside of the buildings, sweep the floor. As sweeping is a repetitive movement, some temples even teach their monks to meditate while doing this task.

The second and last meal have to be eaten before noon. So around 11:30 a.m monks enter the “SALA” and eat the food leftovers of the first meal. Before sitting, monks pray towards the Buddha statues in the “SALA”. Monks are older than 20 years old. Novices are young boys. Monks (“PHRA” – พระ) sit together in one corner and novices (“NEN” – เณร) in another corner sit together. Novices pray together towards the Buddha statue and then bring the trays to each monk. Two monks share one tray. Novices have a bigger tray for all of them. 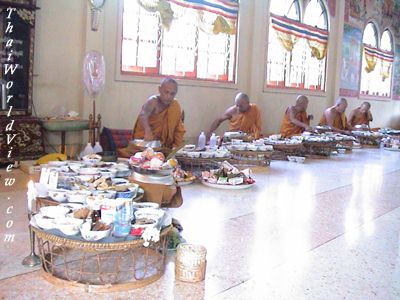 Monks eating meal In some temples like forest temples in Isan area, monks only eat once a day. Monks that do follow the Buddhist forest way are called “PHRA THUDONG” (พระธุดงค์). But in Buddhist temples where there are novices or where the Buddhist way is different, monks eat twice a day.

Then all monks and novices pray in Pali language (บาลี) before eating. Faithful people knee and greet the monks (“WAI” – ไหว้) several times. Some of them pour holy water (“ROT NAM” – รดน้ำ) on the floor. This action is in memory of the deceased persons in order that they also receive their part of merit. Some women that prepared food for monks also receive merit. Then monks eat. Monks sit on a stage that is higher than the floor where faithful persons sit. This has a meaning that monks have a higher status than the faithful persons. When meal is over, monks leave and novices give the trays to the women. Then the women eat the food leftovers together or bring it back home. 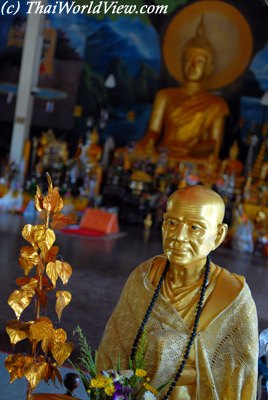 Monk statue When some famous monks die, their corpse is not cremated but momified.

At around 1 PM novices and monks go to the school or university to study Dharma up to 5 or 6 PM. A school bus brings the novices to the school and bring them back to the temple in the evening. For the monks who don’t study, they meditate during the afternoon. After meditation, around 3 PM, it is time for laundry, temple cleaning. In the evening around 7 PM monks pray again in the “BOT”.

Some people are helping the monks during their everyday tasks. They clean the room, carry the alms bowl in the morning. It can be children who live in temples (“DEK WAT” – เด็กวัด), novices, laymen who want to do good deeds. “DEK WAT” or “Temple Boy” help monks and novices to carry the alms bowls, to prepare the meal and so on… Often they are poor children who can get a home and a meal by helping monks. Sometimes they can be children from rich families in order to get a good education thanks to the contact with monks. 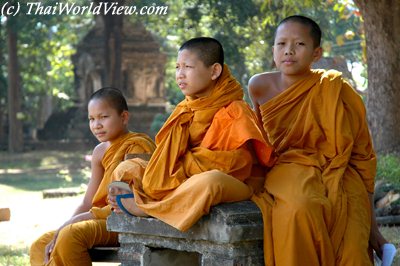 Novices The first official schools were established last century by Thai king Rama V. Before schools could only be found in Buddhist temples. It was the only way for poor people to study. When they were old enough, the novices studied in Buddhist universities in Bangkok. But only boys had the chance to study, girls were denied this opportunity.

Nowadays school is available for all and is mandatory until 15 years old. But still some parents decide to send their boy as novices (“NEN” – เณร) in order to study in temples. Some parents might disagree with the school system or are afraid that their child might be affected by drugs proliferation, carouses in schools. 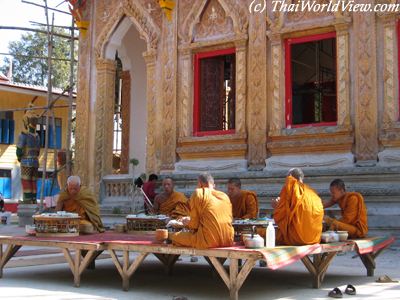 In temples on a river bank, novices are allowed to swim in the river as it is considered as a way to bath. 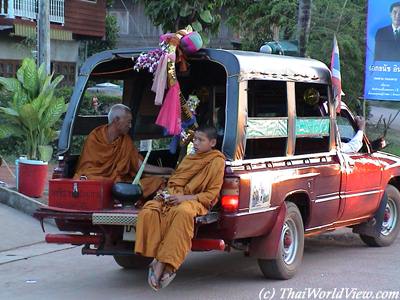 Novice Some children can be monk’s attendant (ลูกศิษย์วัด). It is another name for “Temple Boy”. Such monk’s attendant carry several containers in which he would collect the soupy dishes and fried foods during morning alms. He eats left over food. He does the washing up and the cleaning of the monks place before going to school. On week-end he uses a broom to sweep the temple holy ground.

In Thailand women cannot be monks but nuns. They wear white robes and their head is also shaved. Being a female novices is less valued than being a monk. A Thai tradition says that only women who did have a bad love affair become female novices (“MAE CHI” – แม่ชี). Those young women want to make a break in their life.

Female novices are quite often seen in Thailand. Everyday they wake up at 4 AM, meditate, help and prepare the monks meal. Then learn Dharma, Pali language, meditate and rest. They have two meals per day. Female novices are always under the control of an abbot. 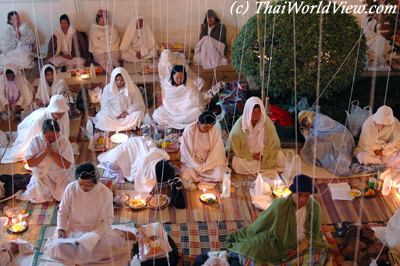 White-robed laywomen They generally suffer an inferior status within the clergy. They are often treated as temple maids doing the cooking and cleaning for monks so having little time to practice meditation.

According to monastic discipline, the nun ordination must be presided by a group of 5 monks and 5 nuns. The female preceptor must have been nun for 12 years. 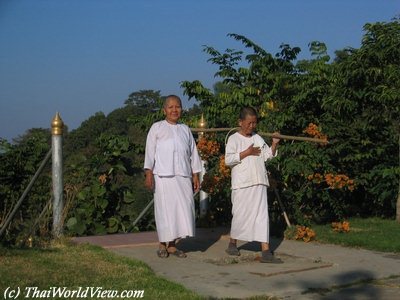 White-robed female novices In 2002 Thailand hosted its first ever ordination ceremony for women, marking a new chapter in Thai Buddhism. The woman was ordained by a Sri Lankan woman monk in the presence of a male Thai monk. Sri Lanka revived female ordinations in the Theravada Buddhism tradition in 1998. The Thai clergy always insists that it is impossible to set up the female clergy in Thailand because the “BHIKKHUNI” lineage in the Theravada tradition was long extinct.

In 1932, the abbot of Wa Khao Yai in Phetchaburi ordained two female novices as “BHIKKHUNI”. Bangkok Buddhist religious authorities ordered them to disrobe and declared invalid their ordination. 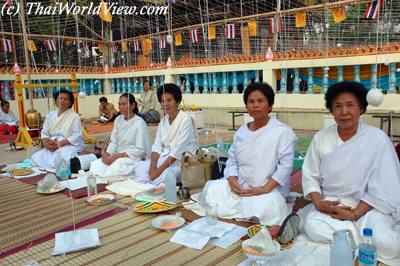 White-robed laywomen A “SAMANERI” (สามเณรี) is a female novice who observes 10 precepts. A “BHIKKHUNI” (ภิกขุนี) is a fully ordained nun.

In local tradition, “PHA KHAW” (ชีปะขาว) or MAE PHRAM (แม่พรามณ์) are either laymen or laywomen who observe eight or ten precepts. 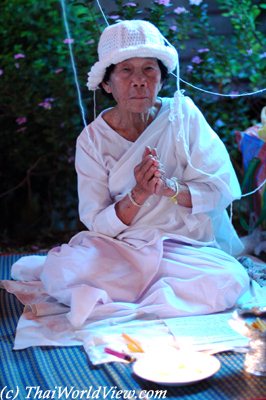 White-robed laywoman According to monastic discipline, a monk cannot be alone with a woman. A woman cannot touch a monk and she cannot give something directly to a monk to avoid any contact. 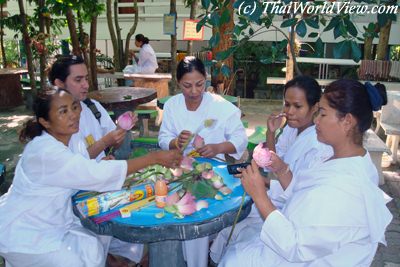 White-robed laywomen Some women but also men enter into the monkhood for a short period of time (บวชชีพราหมณ์). They are “PHA KHAW” (ชีปะขาว) and observe a limited number of precepts.

Depending on the temple’s abbot rules, they may wake up at 3 AM. Then then have half hour to wash up and get dressed. At 3AM30, they meditate until 5 AM. At 5 AM, they can rest one hour. At 6 AM, they prepare the first meal of the day that is eaten at 7 AM. At 8 AM they meditate again. The second meal of the day is eaten before 12 PM. 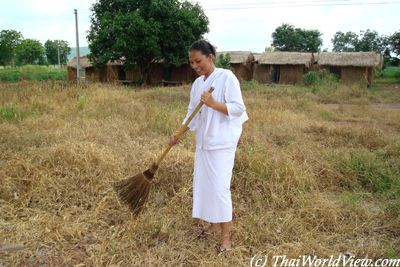 White-robed laywoman No more food is allowed during afternoon and evening. Hot drinks are allowed. During evening time they listen to monks sermons (พระเทศน์). Bedtime is around 9 PM.

Such short period of time as “PHA KHAW” allows to make a break in the life and to recover one’s strength to face everyday life difficulties.