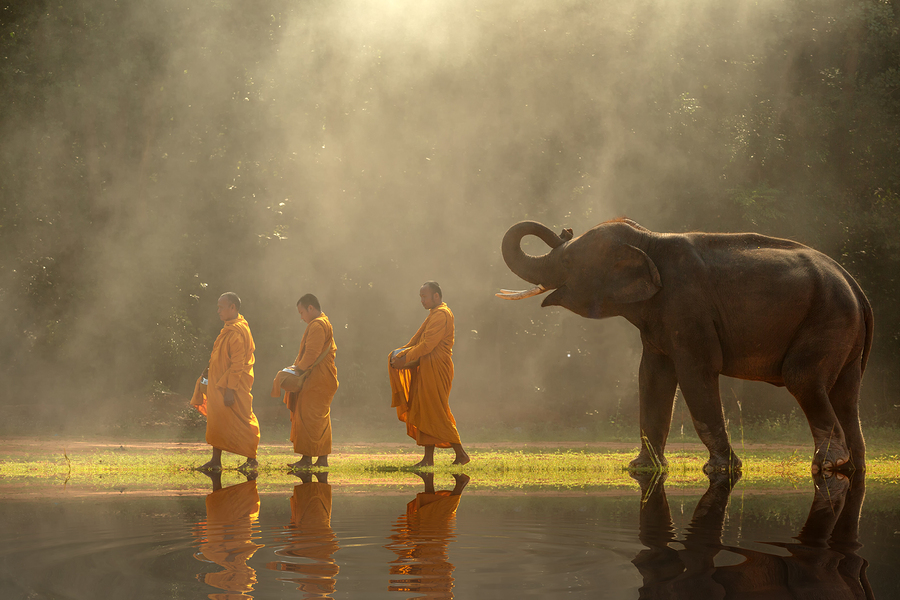 “Then the Buddha explained the Karma Sutra: “Destiny is the aggregate karmic effects from past life. Past Karma determined your present destiny. Present Karmas are to mould your next life. Learn the law of Karma expounded as follows.” – The Golden Precepts by Shakyamuni Buddha

We can find the law of cause and effect in many spiritual traditions and many people nowadays are accustomed to the word Karma, which in fact means action. The principle of Karma is well explained in the Hindu and especially in the Buddhist tradition. The Law of Cause and Effect is a central topic as Buddha explained it in many major teachings called the Sutras.

Buddha explained that all the feelings of happiness, unhappiness, and neutral feelings accompany every single moment of each being’s existence. These are caused by not knowing the real condition of reality and the subsequent formation of Karma, or the setting in motion of the endless chain of cause and effect, through the twelve interdependent links of karmic formation.

Karma According to Buddhism

In Buddhism, Karma is not only the physical action but also the verbal action and especially the mental impulse or urge to act through intention-oriented thoughts which brings one in the direction of a particular experience. In a nutshell, Karma in Buddhism is motivation and what is motivated. That’s why one can accumulate good and bad Karma just by wishing an outcome with a strong motivation.

The action itself is a positive or a negative karmic force, which sometimes is called merit or non-virtue. When completed, this carries its karmic effect, which continues with a person’s mental continuum as a karmic tendency or constant habits to repeat the action though body, speech and mind. For a complete karmic cause to be set in motion, we always need four factors: the basis of the action or the object at which the action is aimed; the intention to act based on a motivation which can be positive, negative or neutral; the action itself needs to be carried out directly or indirectly, and we need to be satisfied or at least feel no regret after doing the action.

If one of these four factors is not present, the karmic consequence will be less heavy. But that doesn’t mean that there will be no results. In the latter case, we speak of a karmic impediment which will contribute to the maturation of other karmic primary causes similar in nature. There can be physical and verbal actions, but these usually start with mental urges or mental Karmas. The urge to do something comes before the actual action and it is often accompanied by its own compelling emotion.

The Ripening of Different Karmas

There are three general rules regarding the ripening of Karma.

The first is the certainty of the result, which means that unless it meets a hindrance or one purifies a negative action or neutralize it with a positive action of the same nature and weight, the result will never disappear until the right circumstances for its ripening present themselves. Connected to this is the fact that the passing of time does not wear off a karmic cause. But even though infinite Karma has been created, there is always the chance to change it and to not experience its result by completely purifying it or counteracting it with a primary cause of an opposite nature, which is like destroying the ability of the seed to grow.

The second rule of ripening is the increase of result which means that from a small action very large results can follow. The third is that if one has not committed a certain action, one will not experience its results even if the secondary circumstances present themselves, although one would still experience the effect of planned actions which he didn’t actually commit in person, but told someone else to do, like for example paying someone to kill someone etc.

In Buddhism it is explained that Karma ripens as an effect in four different ways:

There is also the differentiation between ‘throwing and completing Karma’. The former being the cause that has the potentiality to ‘throw’ us into the next rebirth, and the latter being the one responsible for shaping our rebirth, for example we can be reborn as dog due to the throwing karmic cause, but then depending on the completing causes we could be either a stray dog in constant search for food or a pet in some rich household.

This is because certain causes produce precise effect. For example actions of generosity through our physical, verbal and mental actions produce wealth and enjoyments. The cause of not killing but saving other’s lives produces a long life and freedom from illness. The cause of saying the truth and not lying produces the effect that others listen to what we have to say and believe in us and so on. The most important thing to remember as a general rule is that the karmic result of any action is always based on the intention or motivation behind it, what seems to be a positive action can actually have a negative effect if the motivation behind is not entirely positive. We could say that what we are now is the sum of all our intentions and motivations accumulated in this life and in infinite past lives.