Recommended uses: better relationships with others, business/selling/sales line, generosity and popularity with success in business and trade, Increased popularity, seduce lovers, enchant friends and admirers and willing customers, Promotion in the profession, gambling, and lottery

Mong Dum or black color amulets are the most famous editions of Kruba Krissana’s butterfly amulets. This butterfly amulet was made during the rain retreat in 2013.  The Rains  Retreat is basically a three-month period where monks do not travel away from one location for more than 6 days, and any travel has to be for Dhamma purposes only. The rain retreat is a period of intensive meditation so amulets made during this period are definitely powerful because their meditative powers increased during this period and other than eating and sleeping, monks are following the dharmma and meditating during this period.

Commonly, the number of years a monk has spent in monastic life is expressed by counting the number of rain retreats since ordination. 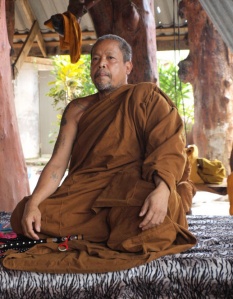 The swastika symbol at the back is a sacred symbol in buddhism and hinduism. It means good fortune and well-being. Kruba Krissana added the gems 1 by 1 to form a swastika shape. His signature in gold ink is also at the back of the amulet.